The World's 10 Most Beautiful Walled Cities

Meena Thiruvengadam
Meena Thiruvengadam is a New York-based writer, editor, and audience strategist who began writing for TripSavvy in 2019. She has written extensively about travel to Cuba, South Korea, North America, and Europe, including Italy’s Amalfi Coast.​
TripSavvy's editorial guidelines

Some of the world’s most beautiful cities are surrounded by walls built centuries ago to protect them from invading forces. These fortified structures in fairy tale cities like Dubrovnik, Croatia, Quebec City, Canada, and Tallinn, Estonia, were punctuated by gates and guard towers, some of which are still standing today. A pair of large watchtowers built in the 1300s still mark the entrance to Old Town in Tallinn, providing visitors with a picturesque entrance to the historic area. Some of these fortifications were built on hills to give them a birds-eye view of the surrounding area and make it easier for residents to spot potential attackers.

You'll find many of the world's best-known walled cities in the world in Europe, but Europe isn’t the only continent where you’ll find magical places built within protective walls. From Europe to Asia, Africa and beyond, these are 10 of the most stunning walled cities you can visit.

You may recognize this city on the Adriatic Sea from "Game of Thrones." Dubrovnik is surrounded by more than 6,000 feet of 13th-century walls punctuated by iconic fortresses. It is one of the most well-preserved medieval cities in the world, and the city's walls offer some of the most beautiful views in Croatia. These are the postcard-perfect shots you came here for. You'll want to give yourself at least an hour or two if you decide to walk Dubrovnik's walls, which feature sixteen towers, three fortresses, and six bastions, among other fortified features. Tickets—which include entry to Lovrjenac fortress—cost about $33; plan for long lines to purchase tickets onsite during peak summer travel times.

Quebec's capital is the only walled North American city north of Mexico. Built between 1608 and 1871, these stone walls include four gates, three towers, and the Citadelle of Québec, once the most significant British fortress on the continent. Inside Quebec City's walls, you'll find sweeping views of the St. Lawrence River, the 17th-century Notre-Dame de Québec Basilica-Cathedral, and Château Frontenac, one of the most photographed hotels in the world. Parks Canada conducts 120-minute guided tours of this picturesque UNESCO World Heritage Site, which is still home to the cannons that once helped to guard Quebec City.

The Estonian capital’s 13th-century walls were once one of the strongest defense systems in Northern Europe. More than half of them are intact—including 26 towers, two full city gates, and two partial city gates. For an epic view of Old Town Tallinn, take a walk on the section of the walls that connects the Nunne, Sauna, and Kuldjala towers. It does cost a few euros to walk this stretch, but it’s a bargain for these priceless vistas. Or, save yourself the euros and stop at the Patkuli viewing platform.

First welcoming settlers in 1,500 B.C., this city in east-central Uzbekistan is one of the oldest in Central Asia and was an essential stop on the Silk Route. Once captured by Alexander the Great and destroyed by Genghis Khan, Samarkand is a city that's been rebuilt from ruins but feels much newer than it is. It's best known for its Islamic architecture, punctuated with bright turquoise domes and glistening mosques. Although Russia destroyed much of the city's 11th-century walls and gates in the 1800s, there are still fragments left over.

This historic city in southwestern Morocco bears a striking resemblance to Marrakech but with a few key differences. Taroudant is smaller than Marrakech, giving it a more manageable feel, and is also set almost entirely within nearly 5 miles of fortified walls. The Saadian dynasty built the towering golden ramparts to keep out Spanish and Portuguese invaders during the 16th century, making them among the oldest in Morocco. Nowadays, Taroudant is a market town known for its leather and wool products. While you can't walk on top of these walls, you can walk along them.

Jaisalmer Fort’s yellow sandstone walls tower above the desert in Rajasthan, seemingly taking on a deep golden hue as the sun sets. This is one of the oldest forts in Rajasthan—an Indian state dotted with forts—and was once a stop on crucial trading routes like the Silk Road. Nowadays, you’ll find several temples, a luxurious palace, and sprawling mansions made from the area’s signature yellow sandstone within the city walls. These streets have inspired novels and movies, and an estimated quarter of the Jaisalmer population still lives within the fort's walls.

The closer you get to this Spanish city’s walls, the more intimidating and magnificent they appear. They were built by the ancient Romans but modified by the Arabs, who later ruled this area. Sitting on a hill above the Tagus River, today's charming city reflects its Jewish, Christian, and Muslim past. It’s about an hour-long drive or a 30-minute train ride from Madrid, making it a great day trip option. You’ll want to wear comfortable shoes and give yourself plenty of time to meander Toledo’s narrow, winding streets.

This colorful Colombian city of more than a million people sits along the glistening blue water of the Caribbean Sea. Its historic center is surrounded by nearly 7 miles of walls and more than a dozen fortresses. Ranked among the best-preserved city walls in the Americas, they are more than 400 years old and took an estimated 200 years to construct. Look closely and you’ll notice subtle differences in sections of the walls. Instead of being built all at once, these walls were built in sections over time, creating subtle differences worth keeping an eye out for.

About 3,000 years old, Xi’an is the oldest city in China, and its 644-year-old walls are some of the best preserved in the country. They were built during the Ming Dynasty—along with a moat and network of drawbridges, watch towers, and gates—and have been refurbished several times since then. Today, visitors can walk, bike, or rent an electric golf cart to explore Xian’s 9 miles of walls. Expect to spend about four hours if you choose to walk the entire walkway at the top of the walls. The South Gate is the most elaborate and offers bike rental nearby.

The historic core of this Greek island town is surrounded by 16th-century walls built in the shape of a crescent. Within them, you’ll find Byzantine and Gothic churches and medieval mosques and fountains. One of the most interesting ways to experience the city walls is to take a stroll on top of them. Tickets are a bargain at around $2, and you can buy them at the Grandmaster’s Palace. The old town is also known for its nightlife—if you want to go out, Hippocrates Square is an excellent place to start.

Article Sources
TripSavvy uses only high-quality, trusted sources, including peer-reviewed studies, to support the facts within our articles. Read our editorial policy to learn more about how we keep our content accurate, reliable and trustworthy.
Was this page helpful?
Thanks for letting us know!
Tell us why!
Back to List

The World's 10 Most Beautiful Walled Cities 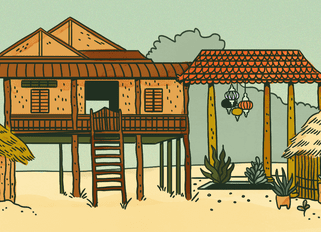