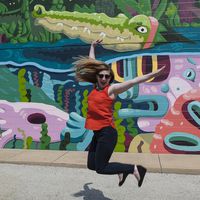 Holly Whitfield
Holly Whitfield is an expert on Memphis, where she has lived since 2005. She has run the Memphis Convention and Visitors Bureau's blog "I Love Memphis" since 2013.
TripSavvy's editorial guidelines

While Memphis offers many different kinds of cuisine—inventive fine dining, authentic ethnic food, enticing gastropubs—this city is best known for its barbecue. Memphis-style barbecue is primarily smoked pork shoulder served pulled, chopped, or via a rack of ribs, often with a dry rub or a tomato-based sauce that ranges from spicy to a bit sweet. However, you can find a sumptuous variety of barbecued meats at the more than 100 Memphis BBQ restaurants, including chicken wings, smoked sausage, BBQ bologna, beef brisket, and turkey.

Don’t underestimate the importance of side dishes that will accompany your mouth-watering meat. Southern-style veggies, rich mac ‘n’ cheese, potato salads, and slaw, which is a must on your Memphis barbecue sandwich.

While only you can decide which Memphis barbecue is the best, here are 12 places (in no particular order) that represent the range of different BBQ restaurants in the Bluff City.

While you can get all your Memphis BBQ staples—ribs, pulled pork, bologna, sausage—at the Cozy Corner, the Cornish hen is the star of the show at this joint. Smoked, tender, and slathered in sauce, this is what to order when you're all pigged out. Cozy Corner has been featured on Diners, Drive-Ins, and Dives on the Food Network.

Pro tip: Don't ignore the white bread that will come on your plate; that's for sopping up the extra sauce.

Payne's is your go-to BBQ joint to try the essential Memphis menu item: the pulled pork barbecue sandwich. The pitmasters at Payne's will start by slow-smoking pork shoulders over hickory coals; then, they'll chop up the tender meat and put it on a bun topped. Finally, Payne's tops your sandwich with tangy mustard slaw and their house sauce recipe.

Side suggestion: While you’ll find baked beans on most BBQ menus, Payne’s boasts some of the best in town.

The most famous barbecue joint in town also happens to be located in a not-exactly-easy-to-find alleyway in downtown Memphis. While the locals may consider this a tourist spot, it’s absolutely worth a pilgrimage for the atmosphere, service, and of course, the food. Their dry rubbed grilled ribs put them on the map, but try the sausage and and cheese plates and beef brisket, too.

Pro tip: Keep in mind that the Rendezvous’ ribs are grilled, not the smoked version that Memphis is known for otherwise.

One of the most popular spots for locals to get their Memphis BBQ fix, this casual, family-run spot serves up ribs and pulled pork along with their beloved BBQ spaghetti and much more. Whatever you order, make sure to try the mouth-watering Dancing Pigs Barbecue sauce (available in mild or hot) for a perfectly tangy flavor. This restaurant, just down the street from the Overton Square entertainment district, has earned numerous awards, top spots on polls, and has been featured in national media outlets.

Fun fact: The Bar-B-Q Shop claims to have invented both the Texas toast BBQ sandwich and BBQ spaghetti.

Leonard's has served some of the best Memphis barbecue since 1922. As the story goes, Leonard Heuberger started selling pit-smoked BBQ sandwiches at his drive-in restaurant some time after that, and people just couldn't get enough. Try the sandwich topped with slaw, of course, or the tender smoked ribs.

Fun fact: Some say that Leonard's is the oldest still-operating Memphis barbecue restaurant.

A regular favorite among local polls and awards, Central BBQ absolutely earns them their fame. You can’t go wrong ordering pork ribs, chicken wings, or the Memphis favorite, pulled pork barbecue nachos. They automatically come on tortilla chips, but the locals will all tell you to ask for house made potato chips or even fries instead. Don’t leave without trying the banana pudding for dessert. Central BBQ has three locations: midtown, Summer Avenue, and downtown Memphis conveniently near the National Civil Rights Museum.

Side suggestion: Central BBQ’s mac ‘n’ cheese is the stuff dreams are made of: perfectly cheesy, creamy, and topped with a sprinkle of barbecue sauce.

You know you're in the right place for the best Memphis barbecue when there is an entirely separate smokehouse on the site of the restaurant, which is the case for A&R Bar-B-Q. While you can order the staples of pork sandwich or ribs, you can also branch out for brisket, BBQ bologna, or sausage.

Pro tip: For those looking for a little heat with their meat, A&R offers a homemade hot link that's worth a try.

One & Only BBQ's three area locations serve their trademark dry-rub ribs, BBQ bologna, smoked turkey, hot and mild sauces, and more with a slew of sides, Texas toast, and pies for dessert. The East Memphis and Agricenter/Shelby Farms locations have plenty of seating, while the Kirby Parkway spot is more of a take away joint, though they do have a few tables.

Side suggestion: One & Only is serious about their potato salad: they have two kinds, a twice-baked potato salad flecked with bacon and a more tangy mustard-based version.

On on the most underrated food street in Memphis sits Elwood's Shack, a casual, homey spot filled with memorabilia and boasting a picnic table filled patio, serving brisket, tender smoked ribs, delectable pulled pork, hot dogs, and more in the form of breakfast sandwiches, quesadillas, tacos, nachos, or by themselves.

Side suggestion: The tater salad is different and delicious, but the Maytag blue cheese and jalapeño cole slaw is truly unique.

Serving up an eclectic mix of barbecue, Southern, and seafood dishes, this Beale Street staple is a solid option for trying Memphis' famous barbecue ribs, plus tamales, turnip greens, and their infamous seafood gumbo loaded fries.

Fun fact: Blues City is on the corner of Beale Street and Second Street so be sure to check out the live music, entertainment, and people watching on Beale before and/or after your meal. It's the only place in the state of Tennessee that allows you to walk around with an open beer or cocktail.

The 12 Best Barbecue Restaurants in Memphis