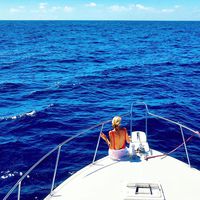 The Bahamas are located in the northwestern West Indies, only 50 miles south-east of the Florida coast. Thanks to its northerly positioning in the Caribbean Sea, and the prevalent trade-winds (so beloved and capitalized by pirates in centuries past), there’s no bad time to visit the Bahamas. The weather remains fairly mild year-round, though there is variation in rainfall and average daily temperatures on a seasonal basis.

Though the most popular time to visit the Bahamas is during the Winter months in the northern hemisphere, with the peak tourist influx occurring in Christmas and spring break. The shoulder seasons are generally the best time to travel to the Bahamas. Mid-April to early July, before the arrival of hurricane season, is the most pleasant time to travel: for temperature, and for prices (as they drop after the holidays).

Popular Islands in the Bahamas

The Bahamas consists of over 700 islands and 2,000 cays, though many remain uninhabited and fewer still are host to an influx of tourists year after year. Nassau, the capital city on the island of New Providence, is most popular spot for weekend visitors thanks to the nightlife and cultural offerings, as well as the number of direct flights from the U.S. Nearby Paradise Island (accessible by bridge) is also popular with tourists.

The most popular out islands of the Bahamas are best-known for their alluring attractions and activities: consider the swimming pigs of the Exumas or the pink sand beaches of Harbour Island in North Eleuthera. Since the distance between these Bahamian islands varies, there are some variations regarding rainfall and tropical weather patterns, though the average temperature remains consistent throughout the archipelago.

The island of New Providence is home to the city of Nassau, the capital of the Bahamas. New Provide is also connected by bridge to the nearby Paradise Island (located 3.1 miles away, and home to the eternally popular Atlantis resort). Nassau shares the same latitude as Miami, and rains less frequently than Freeport. The hottest month is July (82 degrees Fahrenheit / 28 degrees Celsius), the coldest month is January (70 degrees Fahrenheit / 21 degrees Celsius), and the wettest month is July (8.66 inches of rain).

Eleuthera is a reliably popular destination for travelers to the Bahamas and is gaining in popularity thanks to the increased visibility of Harbour Island, a ritzy retreat. November to April reports the sunniest days, while January is the coolest month, and August the hottest, though the temperature is known for being relatively moderate year-round.

The northernmost of the Bahamian islands, Grand Bahama is a popular destination for cruise tourists in particular, and home to the second-biggest city, Freeport. Grand Bahama, alongside the islands of Andros and Abaco, are more likely to be affected by tropical storms. Its northerly location makes it more susceptible to cold fronts in the wintertime, and the weather often parallels nearby West Palm Beach.

Spring in the Bahamas

Spring is the best time to visit the Bahamas, after the spring break crowds have left by the end of March. While the temperature can be in the 60s degrees Fahrenheit during the peak winter season, the weather begins to rise up to the low 80s degrees Fahrenheit by the beginning of April through May. Rainfall, or liquid sunshine in Bahamian parlance, is more frequent in May and June.

What to pack: A sweater and scarf for the evening chill in March, and a light rain jacket to prepare for the rainfall in early May.

Summer in the Bahamas

Known for having sunshine most days of the year, the summer months in the Bahamas are no exception, though June is known for having more regular rain showers. June and July are the best months to visit the Bahamas during the summertime before hurricane season arrives in early August. The start of hurricane season arrives in August, though the country’s northwest location in the Caribbean ensures the temperature hovers around the low 80s degrees Fahrenheit.

What to pack: Rain-gear for the tropical weather, and lightweight fabrics, as August and July are often the hottest months.

Fall in the Bahamas

The months of August and September are when the hurricane and tropical storm warnings reach its peak in the island chain, though you’re more likely to suffer a hurricane along the Atlantic coast of the U.S. than in the Bahamian islands. The hurricane season continues through October, though the chance of a tropical storm drops precipitously (afternoon rain-showers are more likely). November is an ideal time to visit as the rainy weather subsides, and prices have not yet increased for the peak season.

What to pack: Rain-gear in preparation for heavier showers, layers to adjust to the heat-waves.

Winter in the Bahamas

The peak tourist season in the Bahamas begins in mid-December and continues until after Spring Break in mid-April. During this time period, hotels can charge rates up to 50 percent higher than the average price during the rest of the year. Additionally, the weather during the winter months is slightly chillier throughout the island chain, in the mid-60s to high 70s degrees Fahrenheit. Additionally, it is the dry season, with a lower chance of rainfall until later in the season, in March.

What to pack: Scarves, light sweaters, warmer layers for the chillier evenings. Rash-guards for swimming in cooler temperatures.

Lynden Pindling International Airport Guide
Was this page helpful?
Thanks for letting us know!
Tell us why!