Kimberley Mok is a former architect turned writer who covers architecture and the arts. Her work has appeared in the Huffington Post, TreeHugger, and other publications.

For thousands of years, homes were built with locally-sourced materials and designed to suit the particular climate, geography, and a set of cultural customs. These traditional knowledge systems resulted in a magnificent diversity of distinctive, so-called “vernacular” architectural styles all over the world, from the turf-topped homes of Scandinavia to the round rammed earth homes of China’s Hakka people.

Unfortunately, the relatively recent introduction of new technologies and materials disrupted these age-old building traditions in a big way. Though modern, carbon-intensive materials like reinforced concrete and steel can build taller, stronger, and lighter structures, many of these architecturally homogenous buildings are inherently maladapted to local climates. They often require large amounts of energy to heat or cool. This contributes heavily to the building industry’s global carbon footprint, which accounts for almost 40 percent of carbon emissions worldwide.

Thankfully, a growing number of designers are tackling this dire environmental issue by reviving more climate-responsive, energy-efficient forms of vernacular architecture. This trend is powerful in the hospitality sector, where showcasing local culture goes hand-in-hand with forward-thinking sustainable design approaches.

The Regal Courtyard Houses of India

As one might imagine, there is a significant regional variation in the types of vernacular buildings seen in India due to the country's vast geological diversity. Notably, in warmer regions, many buildings were built around an open courtyard, serving as a gathering spot and helping bring in light and fresh air to cool the interior. This kind of design approach is known as passive cooling, reducing indoor temperatures without air conditioning.

Hotel Sunyata in Karnataka takes the traditional courtyard house and revamps it as a splendidly designed boutique hotel. Made with a combination of locally sourced mud blocks and rammed earth, Sunyata prioritizes innovative passive cooling and water conservation techniques inspired by tradition.

"The layout of the project is inspired by the thotti mane, or courtyard houses, which is the vernacular style of construction in the Malnad region," explained Design Kacheri, the Bengaluru-based firm behind the project, to ArchDaily. The designers were dedicated to making a beautiful, comfortable, and eco-friendly hotel experience with the smallest carbon footprint possible. To do so, the building was "designed considering bioclimatic principles," which impacted how materials were used and sourced and building methods and influenced how the hotel operates day-to-day. Those considerations appear in the hotel's earth-cooled air tunnels, solar chimneys, and brick jaali screens.

The Clever Thatched Macuti of Mozambique

For hundreds of years, Mozambique’s strategic location along Africa’s coastal trade route meant that it was a cultural crossroads, soaking up influences from far-off locales. The traditional Mozambican macuti house is a perfect example of this multicultural exchange as it combines building techniques brought in by Arab traders from the north and Europe, and India.

A macuti house often features a square or rectangular floor plan with an open central space connecting all the rooms, ensuring natural cross-ventilation. Thick, double-layered walls are built with mangrove poles or bamboo, filled with sand, stones, and earth, and waterproofed with lime. Large hipped roofs—often thatched with local materials like coconut palm leaves—provide generous shading and protection against sun and rain.

The simple ingenuity of the macuti shines in Sussurro, an owner-built and operated boutique hotel located on the shores of a turquoise lagoon in southern Mozambique’s Nhamabue peninsula. The award-winning project features six beachfront macuti bungalows. There are also indoor and outdoor pool areas, a library, gallery, yoga deck, bar, and restaurant built by Mozambican craftspeople with local materials. And everything is powered by renewable energy sources.

The Charming Stilted Homes of Cambodia

In response to the annual flooding of the monsoon season, various traditional wooden houses in Cambodia were often built high off the ground, on top of evenly spaced stilts. During the rest of the year, the space underneath the typical rural Khmer home could be used as a covered work area or shelter for livestock, providing extra protection from snakes and other pests. There is ample natural ventilation, thanks to wall panels made of palm matting. In contrast, the integration of a gap between the walls and roof on all four sides creates a kind of "umbrella effect" that prevents the accumulation of warm air under the roof.

This traditional form of climate-responsive housing is echoed in the secluded luxury resort of Phum Baitang, located on the outskirts of Siem Reap, just 15 minutes from the famed Angkor Wat complex. Featuring 45 private villas built on stilts, there is also a temple spa, two restaurants, and a variety of pools, all arranged around a century-old restored Cambodian farmhouse. Phum Baitang is surrounded by greenery and working rice paddies, living up to its name, which translates into "green garden."

The Restful Palapas of Mexico

The palapa, an open-sided, thatched structure supported by wooden poles, evolved in Mexico's Yucatan peninsula as a standard shelter from rain and sun. Generally, the best thatch material comes from the leaves of the palma real (royal palm), and when woven properly, such a roof can create its own micro-climate and last up to 20 years.

Jungle Keva, a boutique hotel in Tulum designed by local firm Jaque Studio, is a tasteful reinterpretation of a palapa. Conceived as a "small village" of thatched guest lodges rising from the Mayan jungle, the owners preserved 70 percent of the site's original vegetation to retain the project's connection to nature.

"I get inspiration from the contemporary movement that has been developing in Mexico in the past ten years, where there is a search for pure forms and natural materials that blend with the surrounding context," Jacque Studio founder Jesús Acosta told Dezeen. "In a sense, it's like an abstraction or simplification of vernacular architecture: easy to read, simple, and with a social, natural, and economic conscience."

The property includes a communal lodge with a kitchen and dining area, sun deck, and yoga studio. Each of the four elegantly minimalist guest lodges features white walls stuccoed with chukum — a protective coating made with limestone and resin from chukum trees. They are all topped with a palm-thatched roof, while the lofty height of the ceilings helps keep the interiors cool.

Whatever new forms they may take, these examples of reinterpreted vernacular architecture show that the answers to our current climate crisis may be found in our past. 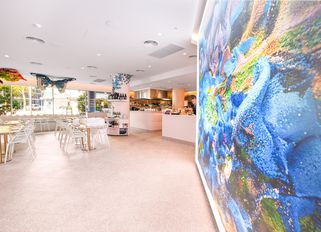