The World's Most Beautiful Metro Stations

Metro stations aren’t usually known for being visually inspiring places. In most North American cities, they’re dark, dingy, and utilitarian at best, but you’ll stumble upon an underground masterpiece every so often. Thanks to social media making it even easier to discover underground gems, these stations finally get their due as design destinations. And in turn, cities are turning their transportation hubs into arts and culture hotspots. From Stockholm to Doha, here are 12 stations worth getting off the train to enjoy.

Stockholm has no shortage of striking metro stations, but perhaps the most recognizable is T-Centralen station, where all its metro lines converge. Known as the “blue platform,” this cave-like stop is adorned with botanical motifs painted on raw granite rock by artist Per-Olof Ultvedt. One section honors the workers who helped build the station, one of the first in the city to host works of art in 1957.

Since then, more than 90 metro stations in Stockholm have added sculptures, mosaics, rock paintings, and other decorations by more than 200 artists, with many of them addressing important themes such as deforestation and women’s rights.

Due to a ban on photography in its metro system that lasted until 2018, Tashkent's spectacular stations have only recently started attracting international attention. It was the seventh subway system to be built in the former USSR, opening in 1977, and is one of only two metros operating in Central Asia.

Among its most beautiful stops is the station dedicated to the Muslim poet Alisher Navoiy, which opened on the O'zbekiston Line in 1997. Riders are greeted by soaring columns, a domed ceiling adorned with intricate floral patterns, and ceramic walls depicting scenes from the 15th-century poet's works.

Designed by prolific Chicago architect Harry Weese in the late 1960s, the Metro Center station in Washington, D.C., is one of the most beautiful stops in the U.S. To conceptualize his brutalist design, Weese toured the country’s transit systems and determined that the capital needed a grand station to reflect its monumental architecture. The result is a series of vaulted cathedral ceilings with waffle-like coffered blocks and recessed lighting that creates a soft and serene ambiance. Inside, you’ll also find G. Byron Peck’s 1989 mural, “Scenes of Washington,” which was expanded in 2001 to depict more images from the Capital City.

In contrast to Naples's gothic, renaissance, and baroque architecture, Toledo station offers a futuristic, otherworldly aesthetic. The station has become a muse for photographers thanks to its underground room dominated by the oval-shaped Crater de Luz, a cone sculpture by architect Oscar Tusquets Blanca, which passes through each level of the station. Inside are LEDs programmed by artist Robert Wilson, while the walls are clad in a mosaic of white, blue, gold, and black tiles. Together, the features represent the descent below sea level.

Before the station opened in 2012, excavation work revealed several historical artifacts, including a wall from the Aragonese period, which has been restored and integrated into the architecture on the first floor.

It’s not unusual to see photographers sleuthing around Sydney’s busiest transit hub, Wynyard station. ​​Following a recent revitalization led by Make Architects and the firm Architectus, the station boasts a sleek and modern new pedestrian link to the Barangaroo waterfront, in addition to its famous “Interloop” art installation by artist Chris Fox. Commissioned in 2017, the 50-meter sculpture features the repurposed treads of one of the city’s last old wooden escalators. The design and engineering process took over six months to complete, representing a feat in breathing new life into a relic from the past.

This year, the station also announced the debut of Wynscreen, a multimedia system that will display various works by artists, animators, designers, and choreographers—adding a new visual element to engage riders.

Reminiscent of a colorful kaleidoscope, Olaias station in Lisbon was built to commemorate the 1998 World Expo. The station, designed by architect Tomás Taveira, features art installations from four Portuguese artists and colored paneling by António Palolo. Like many buildings in Portugal, the walls are clad with decorative tiles while stained glass windows drench the interiors with tinted light. Look up and you’ll notice fish-shaped lamps (a nod to Portugal’s famous canned sardines), geometric ceiling panels, and columns in every primary color, adding a whimsy to the Brutalist structure.

With its crystal chandeliers, marble pillars, and golden mosaics, you’d almost expect Moscow’s commuters to waltz through Komsomolskaya Station on their way to the platform. Constructed in 1952, the space was inspired by a wartime speech of Stalin, and the creative duo behind its extravagance (Artist Pavel Korin and architect Alexey Schusev) even won the Stalin prize for their work. Beyond its beauty is a blatant political mission. The station was also designed to promote Soviet propaganda, so you’ll find sculptures of fallen leaders and scenes depicting moments of Russian history.

Though it hasn’t been in use since 1945, the Old City Hall stop is still one of the most ornate stations in the New York City subway system. Among the standout features are the intricately tiled archways by famed Spanish architect Rafael Guastavino, as well as the vaulted ceilings, skylights, stained glass windows, and brass chandeliers. While few people can access this station, the New York Transit Museum occasionally runs special tours of the station, allowing a lucky few to soak in its grandeur.

The crown jewel of Taiwan’s Formosa Boulevard station is undoubtedly its “Dome of Light,” which is said to be the largest glasswork in the world. Comprised of 4,500 panels—many of which are hand-painted—the installation was made by Italian-born, Mexico-based designer Narcissus Quagliata, who gathered inspiration by spending time in Kaosiung. The result is a collection of metaphysical symbols arranged into four quadrants representing the sea, life, creation, and conflict.

The dome took four years to complete and was inaugurated in 2008, sparking immediate international attention. Since then, many of Kaohsiung’s old warehouses have been transformed into studios and art galleries, turning the former factory town into one of Taiwan’s most vibrant design hubs.

Paris’s Arts et Métiers Station lies below the city’s surface like a steampunk-style submarine. As you step inside, your eye is drawn to riveted polished copper walls, massive gears hanging from the ceiling, and port holes filled with imagery from the 19th century. Even the carved wooden seats and copper garbage cans fit into the theme. The station was revamped in 1994 by Belgian comic book rançois Schuiten, who drew inspiration from the science fiction works of Jules Verne and the nearby Musée des Arts et Métiers, an industrial design museum featuring inventions from the 18th and 19th centuries.

Santiago has long been famous for its colorful murals, and one of its most vibrant works can be spotted inside the Universidad de Chile metro station. While waiting for the train, riders standing on the platform can admire a mural spanning over 12,000 square feet. The work by Chilean painter Mario Toral, titled “Memoria Visual de una Nación” (Visual Memory of a Nation), was completed in 1999 and depicts the country’s history from its pre-Colombian Indigenous roots to the violent Spanish conquest. To bring the magnum opus to fruition, Toral traveled around the county for two years, interviewing historians, poets, and representatives of Indigenous groups, before spending three years mapping out the mural that’s now a civic treasure.

Since its opening in 2019, Doha’s ultra-modern driverless metro system has marked a new chapter for Qatar’s capital city. At its heart is Msheireb, a downtown interchange station designed by Dutch architecture firm UNStudio. Inside, you’ll find vaulted ceilings that reference the “bridge between Qatar’s historic architecture and its future as a beacon of innovation and prosperity.” Added quiet spaces for rest and reflection were inspired by the country’s historic caravanserais, roadside inns with courtyards that served as gathering places along ancient trade routes.

According to UNStudio, most people in Doha traveled by car before the metro system was introduced. With plans to expand its transit network before 2026, the design of its stations could play a key role in encouraging more commuters to travel by train.

The World's Most Beautiful Metro Stations 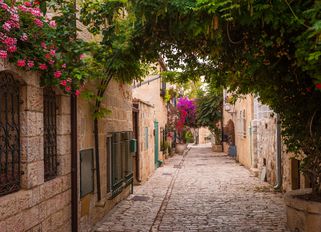