The Best New Hotel Openings of 2023

Laura Ratliff
Senior Editorial Director
Laura Ratliff is TripSavvy’s senior editorial director. She joined the TripSavvy team in April 2019 after spending two years as a freelance travel writer and editor, where she spent more than 200,000 miles on a plane each year.
TripSavvy's editorial guidelines

Few things are better than a great hotel stay—and a big part of that, as far as we're concerned at TripSavvy, is staying at somewhere with a bit of buzz. These much-anticipated hotel openings have it all, whether you're looking for top-tier culinary experiences, truly unique spa offerings, or a chic haunt in the heart of a sprawling city. As you start planning your 2023 travels, look to these eight forthcoming hotels to ensure you have a truly resplendent stay.

The esteemed Dorchester Collection will make its first foray into the Middle East next year by opening The Lana, the 10th property in the legendary portfolio that includes Le Meurice and the Beverly Hills Hotel, among others. Dubai has no shortage of flashy openings, and The Lana stands to represent the City of Gold well, boasting 225 rooms with floor-to-ceiling windows, Gilles et Boissier-designed interiors, and eight restaurants, including the "fire-forward" Fuego, to be helmed by a yet-to-be-announced star chef. Opening March 2023, dorchestercollection.com

Louisville gets a new bastion of cool next spring when Hotel Genevieve, named for a regional type of limestone used in bourbon production, opens in the city's NuLu neighborhood. Conceived by the Austin-based Bunkhouse Group and designed by Memphis's LLW Architects, the hotel aims to go beyond Louisville's equine and bourbon history, showcasing the unique personalities and talents who have called Derby City home over the years. With 122 rooms across six floors plus a Parisian-inspired rooftop restaurant and bar, Hotel Genevieve's interior designs come from Philly's ROHE Creative. Opening spring 2023, hotelgenevieve.com

Japanese stalwart developer Tokyu Group will put its mark on trendy Shinjuku next year with the opening of a sprawling multi-use complex, steps from Seibu-Shinjuku Station. Boasting 635 total hotel rooms, 97 of those rooms will belong to the luxe Bellustar, while the remainder will be part of the more budget-friendly (but just as chic) Hotel Groove. Both hotels can enjoy the 47th-floor "sky spa" and "sky dining" on the 45th, as well as a cinema and 1,500-person concert venue. Opening January 2023, tokyuhotels.co.jp

Ranked the world's most livable city, Vienna gets a new luxury highlight in 2023 when the Mandarin Oriental opens its doors in a turn-of-the-century Viennese art nouveau building on Riemergasse. The 151-room hotel will be designed by London-based Goddard Littlefair, also known for the Intercontinental Hotel Berlin and Budapest's Corinthia Hotel. Want to test out the world's most livable city for yourself? You can, in one of the property's 17 luxury penthouse apartments. Opening 2023, mandarinoriental.com

Depending on who you talk to, there are few 2023 openings more exciting than Dolly Parton's namesake five-story resort in the heart of Tennessee's Great Smoky Mountains. "In its simplest form, HeartSong is about the Smoky Mountains and why I continue to come back home year after year," Parton said. "It is the place I recharge and stay grounded. The beauty of the mountains—at every hour and in every season—is simply an inspiration." The resort, adjacent to Dollywood's DreamMore Resort and Spa, which opened in 2015, will feature a sprawling lodge, and many of the rooms have balconies to showcase the stunning landscapes the area is known for. Opening late 2023, dollywood.com

Wine travel is always popular, so why wouldn't one of the world's leading hotel and resort developers want to get in on the action? Banyan Tree's forthcoming 30-villa Mexico resort features the company's first proprietary winery, using insights from the local community to ensure sustainable viticulture. The ultra-luxe resort will be designed by Mexican designer Michel Rojkind and feature all-pool villas, a signature Banyan Tree spa, and five dining venues. Spa menus will showcase indigenous medicinal plants like hoja santa and white sage, all grown on-site at the bio-endemic garden sanctuary. Opening mid-2023, banyantree.com

Hilton's luxe offshoot heads to Disney next summer, as the Conrad Orlando at Evermore is set to debut 433 rooms, 51 suites, and 10 sprawling family suites. If you're exhausted from park-going, the Conrad is sure to be a luxurious retreat, offering a signature spa and a water garden. Set adjacent to Walt Disney World, the hotel is part of the Evermore Orlando Resort, which includes a 20-acre tropical beach, an eight-acre crystalline lagoon with aquatic activities, and two Jack Nicklaus-designed golf courses. Opening summer 2023, hilton.com

The newest Four Seasons opening might be one of the smallest properties in the portfolio, but it's also one of the most unique. Naviva is the brand's first adult-only tented resort in the Americas, featuring 15 luxurious tents set among 48 acres on a private peninsula. Relaxation is the name of the game here, as guests are invited to fill their days with activities like breathwork, woodology, or personalized temazcal ceremonies. Naviva guests will also have access to the adjacent Four Seasons Resort Punta Mita. All that luxury won't come cheap, though—a stay here will start at $3,950 per night, including meals, snacks, beverages, and one 60-minute spa treatment. Opening December 2022, fourseasons.com 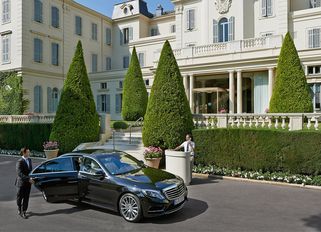