The Spirits Industry Is Broken, But a Sustainable Revolution Is Coming

The spirits industry is a broken relic of an industrial food system.

Instead of using grain produced by local growers, it relies on factory-farmed commodity crops. Instead of protecting wild and domestic agave, it harvests the plants faster than they can be regrown. Instead of repurposing spent grain into animal feed or compost, it sends tons of waste straight to landfills.

It's an industry that produces 12 times as much wastewater as liquor and emits 6.5 pounds of carbon dioxide into the atmosphere per bottle on average—and because spirits aren't considered "food" by regulators, distillers can use artificial ingredients without ever informing consumers.

But the industry is finally turning away from these harmful practices. A growing number of craft distilleries and nonprofits are rejecting traditional approaches in favor of a more sustainable path. From using local ingredients and food byproducts to implementing greener technologies and packaging, they're pouring a better, more ecologically responsible drink.

Over the last generation, the farm-to-table philosophy (eating meat and produce grown by small, local farmers and ranchers) has become a guiding principle for kitchens across the country. Wine grapes, too, are often estate-grown or harvested from local vineyards. But when Colby and Ashley Frey began producing whiskey, rye, and bourbon from the crops grown on their fifth-generation family farm Frey Ranch in northern Nevada, in 2006, their distillery was one of just a few around the country that wasn't importing grain from thousands of miles away.

Most whiskey in the U.S. is made from industrially-produced corn of unknown origin. Dozens of makers don't even distill the grain themselves. Instead, they purchase pre-made spirits from corporations like Midwest Grain Producers and slap their artisanal label on the bottle. But Frey Ranch is different. They grow their grain, harvest it, and distill it on site.

"We control 100 percent of the whiskey-making process," Colby Frey explained. "We adhere to crop rotation to ensure soil health and work with our nearby dairy farm to use the spent grains to feed the cattle, which in turn provide the manure we use to fertilize our crops." They call their method "ground to glass."

The resulting spirits aren't just ecologically-responsible; the hyperlocal terroir of Frey Ranch makes it a truly unique whiskey. "I truly believe you can taste the different grains in our whiskey expressions, and that's because we approach farming and distilling with conservation in mind," says Frey.

While estate-grown spirits are still few and far between, the concept is slowly catching on, with distilleries like Minnesota's Far North Spirits and California's Reinstein Ranch taking similar approaches to those of Frey Ranch. Even the world-renowned Scottish brand The MacAllan began producing an estate-grown whiskey in 2019.

The spirits industry south of the border in Mexico faces a different set of environmental challenges. The problem is not where the agave for tequila, mezcal, and raicilla comes from but how it's grown and harvested.

Agave matures slowly. It takes seven to 15 years for the plant to mature enough to be distilled. But the booming agave spirits industry can't wait that long. Farmers are harvesting wild plants faster than they can reproduce and industrially monocropping domestic species to keep up with demand. This practice makes the agave vulnerable to infestations and disease. When crops fail, as half of the agave plants in Jalisco did in the late '90s, the shortage sets off a crisis that wipes out small farming and distilling operations and leads to more intensive, ecologically devastating practices.

In Guadalajara, Mexico, the nonprofit Mezonte is working to break the boom-and-bust cycle. They provide support and fair wages to family farmers and small-batch distillers while encouraging the stewardship of agave diversity (more than 200 species are endemic to Mexico) and precious resources like water and soil. Out of their tiny tasting room in Guadalajara, Mezonte sells the spirits with total transparency; the name of the farmer-distiller who produced the liquor is on the label of every bottle.

It’s not possible to have a totally sustainable mezcal industry ... but we can give farmers and distillers what they need so that they do the least harm.

Mezonte tasting room manager Zule Arias has no illusions that their work will overhaul the industry, but it's a start. "It's not possible to have a totally sustainable mezcal industry," she said. "But we can give farmers and distillers what they need so that they do the least harm."

Other distilleries are approaching ecological harm-reduction from an ingredients perspective, making their spirits not out of freshly grown ingredients but food waste. In Wisconsin, the abundance of whey left over from the cheese industry can be sold as fertilizer or fed to pigs, but most is destined for landfill. Copper Crow Distillery in Red Cliff, Wisconsin, the first Indigenous-owned distillery in the U.S., is repurposing it for the bottle.

Despite its easy availability, whey-based spirits are still rare, says co-owner and distiller Curt Basina. "Because the sugar in whey is lactose, it's a complex sugar and does not like to ferment. The return isn't that great [so for many distilleries], the yields do not justify the effort."

But Copper Crow's location in America's Dairyland puts them less than 150 miles away from a large dairy that concentrates their whey waste. That gives it a much higher sugar content which Basina can separate and distill into vodka and gin. "The finished product is creamy, kind of buttery or dairy-like, and there's definitely a sweetness like sake," he says.

As awareness of the spirit industry's ecological impact spreads, more and more drinkers seek distilleries like Copper Crow, whose methods mirror their values. "I think the future is quite bright for us," said Basina, and if the rapid upward trajectory of the farm-to-table movement is any indication, there's little doubt it will be. The revolution is underway. 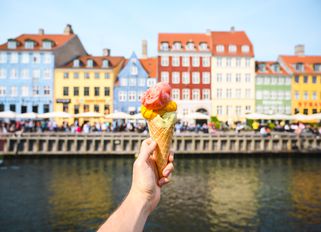