The Best Place to Find Contemporary Design in Stockholm? A Cemetery

It's no secret that Scandinavia has a reputation for being design-forward, and Stockholm is no exception. From the cobblestone streets of its colorful Old Town to the vibrant SoFo neighborhood in the trendy Södermalm district, the city fills almost every inch of its tight space (just 73 square miles in total) with art galleries, museums, and independent shops specializing in jewelry, vintage clothing, prints, houseware, and more. Listen in on a conversation between Stockholmers, and they're usually talking about a hot trend on the horizon. Conversations don't begin with "What did you do this weekend?" but rather, "Did you do anything new this weekend?"

In Stockholm, dressing well is always the goal, as seen from the chic fashion sported every day on the streets of Östermalm, and the country's signature minimalist design aesthetic extends into every corner of life. Things shouldn't just look good; they should be useful. Simple shapes, clean lines, and functionality have become a significant part of what non-natives associate with Swedish design—and while Swedes didn't invent this style of functional design, they did write one of the first books on it. Printed in 1899, "Modern Swedish Design: Three Founding Texts" outlines the importance of function, aesthetics, and affordability and led to the first-ever Stockholm Exhibition of 1930, which raised the profile of Swedish architecture.

On a recent trip to Stockholm, however, I was pleased to find that the city's design aesthetic extends far beyond the people, interiors of coffee shops, and construction of the buildings I passed. It was an afternoon spent in a cemetery just 20 minutes south of the city center, where I really felt I got a lesson in Swedish design.

Skogskyrkogården, which translates to "Woodland Cemetery," first caught my eye because I knew it to be the resting place of Swedish film star Greta Garbo. On a free afternoon, I decided to hop on the metro to see the gravesite of classic Hollywood royalty. But beyond the famous names buried there, the cemetery is also considered one of the essential destinations in Sweden to experience modern architecture, a distinction for which it was named a UNESCO World Heritage Site in 1994.

The cemetery's history began in the early 1900s when Stockholm's city council acquired a tract of former gravel pits overgrown with pine trees. The city decided to organize an international architectural competition to design the cemetery, and the competition was won by two 30-year-old Swedish architects, Gunnar Asplund and Sigurd Lewerentz. Their design, built between 1917 and 1920, has become one of the most profoundly influential cemeteries in the world.

Unlike most cemetery designs at that time, primarily inspired by English parks, Asplund and Lewerentz's winning design did not feature a structured layout: it flowed into the already existing landscape of the cemetery rather than restructuring it and shaping it into something new. The designers even took advantage of irregularities on the land to create a graveyard fully adapted to the earth beneath it. Instead of taking after the landscape design that had influenced prior cemeteries, Asplund and Lewerentz found influence in ancient and medieval Nordic burial styles.

As I strolled through the cemetery, I noticed very few footpaths. The graves weren't rigidly lined up in paved rows but peppered by the looming birch trees in small clusters—you might not even spot them at first unless you were looking for them. Often, to walk over to the graves, you'd be walking on grass, as if you were hiking through an enchanted forest, treading on gently rolling hills. Spending time in Skogskyrkogården felt like spending a day in the woods rather than spending a day with the dead.

There's a reason for that. At the time of the cemetery's creation, the functional design laid out in "Modern Swedish Design: Three Founding Texts" began taking hold in Sweden. Along with a simple design that rejected rigid structures and allowed mourners to feel like they were in nature rather than in a cemetery, Skogskyrkogården also provided its visitors with thoughtful and practical touches, like a peaceful meditation grove, Almhöjden, that sits on top of a hill.

The architecture of the cemetery's crematorium, built in 1940 as cremation became more popular, is also an excellent example of the functional design that was bubbling up at the time. Featuring three chapels, it was built to simultaneously allow three funerals to be held undisturbed, with small gardens and waiting rooms built between each chapel. Each chapel was built at a different height to emphasize the cemetery's rolling slopes.

As I finally found my way to Greta Garbo's gravesite, marked with a rose-colored tombstone, and sitting on an elevated step at the end of a long stone-lined pathway, I felt accomplished. While spending the afternoon in a cemetery might seem unusual, Skogskyrkogården's beauty has transformed it into a much-visited destination for design-loving travelers—and it's not hard to see why. My afternoon with the dead was the perfect lesson in Swedish design.

Article Sources
TripSavvy uses only high-quality, trusted sources, including peer-reviewed studies, to support the facts within our articles. Read our editorial policy to learn more about how we keep our content accurate, reliable and trustworthy.
Was this page helpful?
Thanks for letting us know!
Tell us why!
Back to Article

The Best Place to Find Contemporary Design in Stockholm? A Cemetery 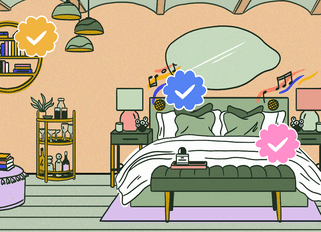