The Pink Marble That Built America: When Knoxville Was the Epicenter of Design

Mariah Rigg is a writer and educator with an MFA from the University of Oregon. Her work can be found in Oxford American, The Cincinnati Review, and elsewhere.

A little over a year ago, I left Eugene, Oregon, and moved sight unseen to Tennessee. I had never lived in the South before, let alone spent time there, but I had decided to dedicate the next five years of my life to a Ph.D. in English, which just happened to be located in Knoxville.

At first, I could not get over how different Knoxville was from Oregon: the abundance of cars was a big change, as was the 70 percent humidity. But as I settled into my new life, I learned about Knoxville's rich, complicated and fascinating architectural history, and the city slowly grew on me. My journey all started with my first trip to Mead's Quarry.

Located in Ijams Nature Center and surrounded by miles of walking trails, Mead's Quarry is now a popular swimming hole for residents of Knoxville and visitors alike. But before Mead's became a gathering place to escape the summer heat, it—along with Ross and Fort Dickerson Quarries—was the life source of Knoxville's economy: it was used to extract Tennessee marble, a highly polishable stone that was in great demand.

Often called the "Boulder of the South," Knoxville has another nickname, one which, if you visit the city, you will find plastered across establishments everywhere you look. "Marble City" is an homage to Knoxville's mining history, its pink marble, and the architecture it inspired across the nation. In 1838, Tennessee's first state geologist, Gerard Troost, wrote, "I do not know any European or Egyptian [marble] equal in beauty with the Tennessee marble." Funnily enough, Tennessee marble isn't marble at all but a unique type of limestone found solely in Tennessee.

Before it was used for houses and grand buildings, Tennessee marble was used to make tombstones locally, including the monument for William Blount, the first Governor of Tennessee. In 1848, Tennessee's marble attracted national attention in the world of architecture after it was shipped to D.C. to build the Washington Monument. When railroads came to the city in 1855, this allowed marble from Knoxville to be used not only within the state of Tennessee but also across the United States.

In 1838, Tennessee’s first state geologist, Gerard Troost, wrote, 'I do not know any European or Egyptian [marble] equal in beauty with the Tennessee marble'

Today, the legacy of this pink marble lives on through some of the most storied buildings in America. From local architecture like the Candoro Marble Building and the Knoxville Museum of Art to national monuments such as the Lincoln Memorial in Washington, Grand Central Station, the National Gallery of Art, New York Public Library's Stone Lions, Patience and Fortitude, and the Smithsonian Museum of History and Technology, the chances are high that you have come across Tennessee marble before.

Tennessee marble even gained worldwide renown, its reputation reaching so far as the famed Carerra mines in Italy to attract the likes of Albert Milani. As a stonecutter and accomplished sculptor, Milani was tasked with the more delicate work on the Candoro Marble Building, including carvings at the base of columns and the shield above the entrance. Milani's work can also be found at the Post Office on Main Street and the Holston Building on Gay Street, which were built in 1934 and 1912, respectively.

But as grand as Knoxville's marble legacy is, it doesn't come without its own complications, and one must reflect on its history to truly appreciate its massive architectural significance.

Ramsey House, one of the earliest surviving marble structures found in Knoxville, was built by English architect and joiner Thomas Hope in 1797. At the time, it was considered the "finest house in Tennessee." (In reality, the house was a forced labor camp owned by a family of states' rights Democrats and enslavers who, as the Civil War broke out in 1861, sided with the Confederate Army.)

When the United States Union Army occupied Knoxville in 1863, part of the Ramsey estate burnt down, and the Ramsey family was exiled to South Carolina. Today, the house has been classified as one of Knoxville's Historic Homes and restored due to the work of the Daughters of the American Revolution, known historically for its exclusion of people of color. While the grounds have been sold off, the Ramsey House is open for public tours at Thorngrove Pike in East Knox County.

The East Tennessee History Center is the oldest public building built of Tennessee marble, with sections dating back to 1874. It is open weekly for paid public tours and houses the McClung Collection along with the Knox County Archives and the Tennessee Archive of Moving Images and Sound.

Like many of the buildings in Knoxville, the East Tennessee History Center has a problematic legacy due to its founder, Dr. G.M. Ramsey. Regarded to be one of the first historians of Tennessee because of his book, "The Annals of Tennessee," Dr. G.M. Ramsey was a Confederate enslaver and the son of Francis Alexander Ramsey, who built Ramsey House. Before being driven out of Knoxville, he was president of the Knoxville Branch of the Bank of Tennessee and a champion of Tennessee River improvements and railroad expansion that contributed to Tennessee's industrial growth.

The East Tennessee History Center walks a fine line when it comes to celebrating the history of Tennessee and has gone so far as to name an award after Dr. G.M. Ramsey–the Ramsey Award for Lifetime Achievement, given to someone "who, over the course of a lifetime, has made outstanding contributions to the understanding and preservation of East Tennessee history." It is unclear whether they or Ramsey House have made any statement considering Ramsey's role in the Civil War.

Though Knoxville's marble mines are no longer operational, the architecture community and arts organizations within Knoxville have invested in restoration efforts that will keep the marble buildings around for a long time.

Built in the Beaux-Arts style central to the American Renaissance, the design of the Candoro Marble Building is centered around the order, symmetry, formalism, and elaborate ornamentation. The grounds are graced with marble carvings, intricate ironwork, and frescoes surrounded by gardens. In 1923, Charles Barber designed the Candoro Marble Building as a showcase and office for Candoro Marble Company, the leading producer of finished Tennessee pink marble and one of the largest employers in the area.

Thanks to work done by the Candoro Arts and Heritage Center and funding from the Asland Foundation, the Candoro Marble Building has been restored and added to the National Register of Historic Places. This restoration required many layers of work, including repairs to the roof, exterior masonry, insulation, and framing. A local masonry contractor, WASCO, was hired to clean the exterior masonry, removing years of pollution from the marble. The original steel casement windows were restored, along with the original bronze window hardware and period-appropriate glass, thanks to help from the original manufacturer. Today, the Candoro Marble Building is the home of Tri-Star Arts, a local nonprofit providing artist studios, galleries, and arts programming for artists from the area.

After being headquartered for years at the historic Dulin House on Kingston Pike, the Knoxville Museum of Art was moved in 1990 to a new building in the 1982 World's Fair Park. This modernist building, designed by New York architect Edward Larabee Barnes, has a panoramic view of the city, 12,700 square feet of exhibition space, two extensive outdoor gardens, and is sheathed in Tennessee pink marble.

Tennessee marble graces not only the outside of the Knoxville Museum of Art but the inside as well. Dedicated to celebrating the rich and diverse visual culture of Eastern Tennessee, Knoxville Museum of Art hosts both visiting exhibitions and local art alike. "Higher Ground: A Century of the Visual Arts in East Tennessee," the first permanent exhibit devoted to East Tennessee, is dedicated to artists who contributed to Knoxville's legacy, including marble carvings by Albert Milani, Lloyd Branson's painting "Hauling Marble," and other supporters of Appalachian life.

Knoxville's legacy as a design epicenter is complicated, but the significance of its contributions to some of the country's most beautiful buildings is worth reflecting on. While mining for pink marble is no longer an occupation in the city, its presence is still felt in both the awe-inspiring monuments it helped to create and in everyday Knoxville favorites that locals pass by daily. One only needs to swim Mead's Quarry to see how this Tennessee city remains transformed by this legacy. 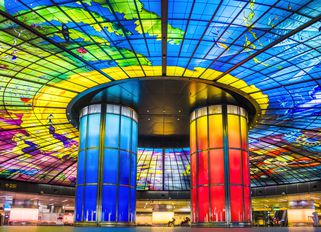