A 5,000-year-old city that sees some 10 million visitors a year, Jerusalem's Old City ranks as Israel's most visited destination. And as a pilgrimage site for three major faiths, it's home to some of the most sacred places on Earth: the Church of the Holy Sepulchre for Christians, the Al-Aqsa Mosque for Muslims, and the Western Wall for Jews.

Given the city's age and popularity, Jerusalem has been implementing significant structural changes on a wide scale over the last decade to ensure that it's brought to the modern era. While some of the updates to the Old City's infrastructure have been beneficial to all (including adding signs highlighting historical or archeological findings and installing garbage collection points in the main tourist areas), a few local organizations have been steadfastly working to make it more accessible to everyone who finds themselves in The Holy City—to people with mobility issues, those who are visually impaired, even families with strollers.

Updates to the city to make it more accessible have been sweeping. Throughout all four quarters of the tiny Old City, nearly 4 miles of alleyways have to date been made accessible, and more than a mile of handrails have been built. Public restrooms have been renovated to be accessible, while street lights have been installed to maximize lighting coverage. And 60 Bluetooth devices called beacons have been introduced throughout the city, which, when synced with the "Step-Hear," give "location, service, and navigation instructions" to those who are visually impaired or blind. (The audio instructions are currently available in Hebrew, English, and Arabic, with plans to add more languages and install 200 beacons.)

"There are a relatively small number of historical cities in the world that combine archeological findings, tourist sites, and human activities that [have been ongoing] for thousands of years," Gura Berger, a spokesperson for the East Jerusalem Development Company, told TripSavvy. "As far as is known, there is no historic city that is also defined as a World Heritage City that has carried out a large-scale accessibility project like the one in Jerusalem."

The project, which has cost 22 million Israeli new shekels (about $6.7 million) so far, has been undertaken by multiple local organizations and field teams. Funded by the Jerusalem and Heritage Ministry and the Jerusalem Development Authority, the project has been carried out by PAMI and overseen by multiple local organizations, including the Ministry of Tourism, the Accessibility Department of the Jerusalem Municipality, the National Social Security Agency, and the Israel Antiquities Authority.

Efforts to make the Old City accessible have been going on for over a decade, with Dr. Avi Ramot, the Director of the Israeli Center for Accessibility of Shekel Association, first meeting with JDA in 2007 to "examine the possibility of executing accessibility in the Old City."

To update the framework of the city, Jerusalem had to follow certain sets of guidelines laid out by UNESCO and Israel's Antiquities Authority. Following local topographical restrictions, accessibility consultants were also brought on, considering such challenges as the 260-foot height difference between the Old City's highest and lowest points and the fragile state of the historical buildings, according to Berger.

"The main purpose [of the project] is to make the open space accessible to every person while strictly maintaining the character and uniqueness of the city for future generations," said Berger. "Whatever can be accessed will be accessed, as long as we don't harm archaeology, private property, or the city's unique fabric."

The massive undertaking has certainly faced its fair share of challenges. The Old City has undergone transformative change multiple times in its over 5,000-year-history, with empires the world over having laid claim to the land at one point or another. It's a patchwork of different cultures, featuring Roman street grids, Mamluk buildings, and Ottoman borders.

"The Old City of Jerusalem seems to be a particularly complex challenge due to a combination of a variety of factors and circumstances: complex topography, extremely dense construction, [an] abundance of sites of historical-religious archeological value, [and] a complex and sensitive political situation," Dr. Ramot wrote in "A Matter of Access," a magazine on accessibility for people with special needs.

Implementing accessible traffic routes and handrails was slow and steady, with work subdivided into sections, and work on each section took weeks, if not months. "Any drilling in a wall of a building or a street paving was accompanied by a representative of the Antiquities Authority, and sometimes there was a lengthy discussion about each drilling," said Dr. Ramot.

Compromises have had to be made with religious bodies, too—and some to no avail. Dr. Ramot shared one example of a mobile, wooden ramp—reinforced with wooden strips—leading to the Church of the Holy Sepulchre. Despite efforts to find a better-quality ramp, the Vatican and the Muslim family that guards the church have denied the requests.

Political issues have been an additional challenge, as in the instance where the Jordanian Waqf removed all the handheld rails on the Via Dolorosa. The reason? "It turned out that although we did coordinate the work with the VP of the Waqf, [we didn't get permission from] the right VP," said Dr. Ramot. "After a friendly discussion, 50 percent of the handholds returned the next day. A small tax for big politics."

As far as is known, there is no historic city that is also defined as a World Heritage City that has carried out a large-scale accessibility project like the one in Jerusalem.

While the project initially prioritized the needs of locals, of which 12 percent have disabilities, the needs of tourists and pilgrims have been met over time. Another app, called Accessible JLM, allows travelers with disabilities to plan ahead by finding the most accessible routes from one attraction to the next. Available in eight languages, it has GPS tracking, so visitors can also use it in real time. Free print maps are available at the Ministry of Tourism Information Bureau at Jaffa Gate.

But the project is not yet complete. "Ninety-five percent of what can be accessible is done," Berger told TripSavvy. Of the miles of accessible routes, just over a mile was built during the two years of the pandemic due to the loss of tourism and lack of regulations on construction work. Since tourism has nearly returned to pre-pandemic numbers, finishing the other 5 percent of the project could take some time.

"Physical accessibility will be an important component that will allow more people to enjoy the treasures of the Old City, not to mention the cultural accessibility that will contribute to a deeper understanding of the city on its long history and present life," said Dr. Ramot. "We hope that [we] can spur other historic cities in Israel, and also outside it, to move towards becoming convenient and inviting for all people, residents, and tourists, with and without disabilities." 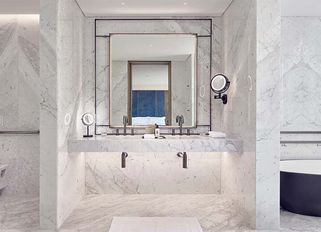