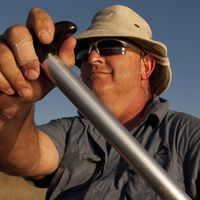 If you're planning a trip to South Africa, it's a good idea to learn a bit of the local lingo. South Africa has 11 official languages, but the easiest place to start is with South African English. Given the country's rich linguistic heritage, South African slang borrows from a range of different influences, including Afrikaans, Zulu, and Xhosa.

Knowing even a few of these words can help break the cultural ice, making potentially tricky tasks like renting a car or ordering traditional food and drinks that much easier.

Babelas (pronounced buh-be-las): a hangover, e.g. "We went out last night and now I've got such a babelas".​

Bakkie (pronounced buh-key): a pick-up, e.g. "Mine's the white bakkie over there".

Biltong (pronounced bil-tong): dried meat, similar to jerky, e.g. "Won't you pick me up some biltong from the shop".

Bliksem (pronounced blik-sem): to beat someone, e.g. "I'm going to bliksem you".

Boet (pronounced to rhyme with 'put'): Afrikaans for brother, can be used for any male friend e.g. "I know him, he's my boet".

Bru (pronounced brew): similar to boet, though it can be used casually for men and women, e.g. "Hey bru, what's up?".

Dop (pronounced dop): alcoholic drink, e.g. "He's had one too many dops".

Dwaal (pronounced dw-ul): spacey, not concentrating, e.g. "I was in such a dwaal I didn't even see her".

Gatvol (pronounced hat-fol, with a guttural sound at the beginning): fed up, e.g. "I'm gatvol of your nonsense".

Howzit (pronounced hows-it): used to ask someone how they're doing, e.g. "Howzit my china?".

Jislaaik (pronounced yis-like): an exclamation of surprise or disbelief (can be positive or negative) e.g. "Jislaaik, we had a good time".

Klap (pronounced klup): slap, e.g. "You deserve a klap for that".

Lank (pronounced lank): lots of, very e.g. "There were lank bars at the beach", or "It's lank cold today".

Lekker (pronounced lak-kerr): great, cool, nice e.g. "It's a lekker day today", or "You look lekker in that dress".

Muthi (pronounced moo-tee): medicine, e.g. "You better take some muthi for that babelas".

Oke (pronounced oak): male person, usually a stranger e.g. "I was waiting in line with a bunch of other okes".

Padkos (pronounced pat-kos): snacks for a roadtrip, e.g. "Don't forget the padkos, it's a long way to Cape Town".

Potjie (pronounced poi-key): meat stew, e.g. "We're all getting together for a lamb potjie later"

Posie (pronounced pozzie): home, e.g. "Come over to my posie when you're ready".

Scale (pronounced scale): to steal or take something, e.g. "I can't believe he scaled my lighter again".

Shebeen (pronounced sha-been): a drinking establishment in the township, e.g. "The liqor store is closed but you can still buy beers from the shebeen".

Sies (pronounced sis): an expression of disgust, can be an adjective for gross, e.g. "Sies man, don't pick your nose", or "That meal was sies".

Skinner (pronounced skinner): gossip, e.g. "I heard you skinnering about me the other night".

Slap chips (pronounced slup chips): fries, e.g. "Can I get some tomato sauce with my slap chips?".

Smaak (pronounced smark): fancy, e.g. "I really smaak you, will you go out with me on a date?.

Takkies (pronounced takkies): sneakers, e.g. "I wore my jeans and takkies and everyone else was in black tie".

Tsotsi (pronounced ts-otsi): thief, e.g. "Keep an eye out for tsotsis on your way home".

Vetkoek (pronounced fet-cook): Afrikaans for 'fat cake', a deep-fried ball of dough usually served with a filling, e.g. "Vetkoeks are the ultimate cure for a babelas".

Voetsek (pronounced foot-sek): an Afrikaans expletive that translates to f**k off, e.g. "If anyone bothers you, tell them to voetsek".​

Vuvuzela (pronounced vuvuzela): a plastic horn or trumpet, typically used at soccer matches, e.g. "Those vuvuzelas make a hell of a noise".