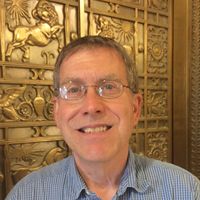 When I was I was a boy growing up in one of Ohio’s most rural counties, a vast forest lay just outside our back door, a place where I spent many happy hours frolicking with my dog. As an adult, I’m now a confirmed city slicker, but whenever I grow weary of the traffic and my noisy neighbors in Columbus and long to hear a symphony of cicadas and crickets and the soothing harmony of birdsong, I always head for the Hills—the Hocking Hills of southern Ohio.

The Hocking Hills region is centered around Hocking County in southeastern Ohio with some overlap into adjacent counties as well. The region is typical of southern Ohio in that its rugged, rolling terrain is largely covered with great tracts of seemingly unbounded woodlands. But what sets the Hocking Hills apart are a number of breathtaking dramatic rock formations, deep gorges, waterfalls, and towering cliffs. Out-of-staters who think of Ohio as flat farmland will be astonished to find topography like this just one short hour out of Columbus.

Not surprisingly, the seclusion and natural beauty make the Hocking Hills one of the state’s principal tourist destinations, especially during the warmer months. But there’s reason to visit no matter the season—blazing fall foliage, the wildflowers of spring, and even the magnificent ice formations bedecking the gorges and cliffs in wintertime all make the region worthy of yearlong exploration. Outdoor activities abound, such as hiking, rock climbing, canoeing and kayaking, fishing, and birdwatching, but the area’s other offerings include everything from tours of the country’s only remaining washboard factory to a ride on the Hocking Valley Scenic Railway. Options of what to see and do are plentiful, but don’t forget to save time for relaxing!

Getting the Lay of the Land

Many of the region’s most visited natural formations can be found in Hocking Hills State Park—its four million visitors per year offer testament to its scenic beauty. The most magnificent site in the park, and the most visited, is Old Man’s Cave, a half-mile long and 150 foot-deep gorge with both an “Upper” and “Lower” waterfalls and a recess cave where, legend has it, the “Old Man” (a hermit named Richard Rowe) resided in the early 1800s.

Not far away is the much-photographed Cedar Falls, artfully dropping down a sloping rock formation. It’s especially dramatic after a big rainfall. Also nearby is Ash Cave, a horseshoe-shaped recess cave 700 feet in length with a much smaller waterfall that forms a towering stalagmite of ice in the winter.

Farther afield and therefore less touristed are attractions like Rock House, the region’s only true cave with high ceilings and window-like openings overlooking a gorge, and Cantwell Cliffs, offering scenery rivaling Old Man’s Cave but with a fraction of the visitors.

To sort out the options of interest to you, begin your visit to Hocking Hills State Park’s state-of-the-art visitors center. It gives overviews of the major attractions but also offers specific information on length and approximate hike times for each trail, as well as their level of difficulty, ranging from the paved, wheelchair-accessible trail at Ash Cave to the 6-mile-long route connecting Cedar Falls to Old Man’s Cave. Interactive screens in the visitor’s center offer suggestions for the best places to see waterfalls, go picnicking, take in scenic views, or go hiking with a naturalist, with children, or even with your dog. Whiteboards offer both naturalists and visitors a place to scribble notes on where wildlife have been sighted or what’s blooming and where to find it.

The best place to pick up information, maps, and brochures on sites outside Hocking Hills State Park is the Hocking Hills Regional Welcome Center near Logan, easy to spot from the road because of its distinctive water wheel. The Center is also a registered Monarch Waystation, where you can watch the butterflies emerge from their chrysalis and be released to begin their long journey to Mexico.

Things to See and Do

I’ve fed hummingbirds by hand at Lake Hope State Park. I’ve canoed the Hocking River by moonlight. And I’ve heard world-class performances in the intimate Stuart’s Opera House in Nelsonville. Those are just the beginning of the diverse experiences available in the Hocking Hills region, which also include:

The various lodging options in the Hocking Hills are plentiful. Myself, I return to the Inn at Cedar Falls over and over. It’s surrounded on all sides by the forest and has a number of accommodation types to choose from. There’s the original two-story Inn just adjacent to the facility’s fine dining restaurant. But there are also log cabins suitable for families and remote hilltop cottages just the right size for couples. A newer lodging option are luxury yurts.

Glenlaurel, an adults-only Scottish-themed inn, is another upscale lodging option, also with luxuriously appointed cottages sprinkled through the grounds not far from the property’s private gorge. A Scottish pub and a Scottish-style Links golf course reinforce the Old World theme.

Other unique accommodations include Ravenwood Castle, complete with crenellated ramparts and a mock drawbridge entrance and themed rooms like Rapunzel’s Tower and the two-story King Arthur suite. Just outside is their “Medieval Village,” a cluster of brightly colored cottages with turrets and half-timbered architecture. Just down the road, Fiddlestix Village is a cluster of historic structures available for nightly rental, including a 1926 B & O caboose and a former country store complete with a potbelly stove and a kitchenette resembling an old-time soda fountain.

The number of private cottages and cabins available for rental literally number in the hundreds and come in all shapes and sizes, from small log cabins suitable for a couple to huge lodges accommodating 32 people. Many have their own private lakes and walking trails, along with fully stocked kitchens, hot tubs, and satellite TV. Use the “Places to Stay” tab at the Hocking Hills visitor site, or use one of the brokers who list multiple cabins on their websites, like Cabins by the Caves or Hocking Hills Quality Lodging.

Similarly, those who want to camp in a tent or RV have a vast number of choices both in the state parks and on private property.

Folks who prefer to cook their own meals in their cabins can find supplies either at supermarkets in Logan or at Grandma Faye’s Grocery and Deli near Old Man’s Cave, a general store selling a bit of everything. But for those who want to leave the cooking to someone else, a number of choices are available.

Fine dining experiences can be found both at Kindred Spirits, the restaurant at the Inn at Cedar Falls, and at Glenlaurel, both of which serve the general public as well as their overnight guests. Kindred Spirits is housed inside an 1840’s log cabin, offering gourmet à la carte fare, while Glenlaurel’s dinners are feasts of several courses with bagpipe accompaniment on Saturdays.

A number of family-style restaurants and diners are clustered in Logan and Nelsonville, the two most sizable towns of the region, and also along four-lane U.S. 33, the main highway traversing the area. My personal favorites are Millstone BBQ in Logan, which offers musical entertainment on weekends, and The Boot Grill inside the Rocky Outdoor Gear store adjacent to the Hocking Valley Scenic Railway in Nelsonville. Try their bison burger!

Another favorite is the Ridge Inn in Laurelville, famed for their meatloaf and melt-in-your-mouth doughnuts. Don’t even try to find out the secret ingredients in the meatloaf—just enjoy!

Afterwards, walk across the street to the Laurelville Fruit Company for tasty cider made from their own orchard’s apples. Also during apple season, consider picking your own apples at Hocking Hills Orchard outside Logan. More than 1,600 varieties of heirloom apple varieties are available here, including George Washington’s favorite and a variety enjoyed by the Romans. Spend some time chatting with owner Derek Mills, truly the Johnny Appleseed of the 21st century!

Definitely allow some alone time during your stay in the Hocking Hills, either hiking or just sitting on the porch of your cabin sojourning with nature. But when you’re looking for guidance on where to find the best natural experiences, there’s no shortage of local companies and individuals who can help.

Naturalist-led tours in Hocking Hills State Park offer unforgettable experiences. I once heard a guide call for owls, and even better, the owl answered! I’ve also foraged and eaten woodland flora like sourwood leaves at High Rock Adventures, where I’ve watched folks braver than myself rappel down sheer rock faces and squeeze through tight spaces on their tummies. I watched our guide at Hocking Hills Adventure Trek overturn rocks in a woodland stream to reveal salamanders and other critters (This company also offers experiences in rock climbing, archery, and belly boat fishing).

More recently, I experienced a magical evening kayaking on secluded Lake Hope as the sun was setting and the moon was rising, a tour led by Mimi Morrison with Touch the Earth Adventures. Our goal was to catch sight of the elusive beavers who reside there, but one of them made it easy for me by swimming directly in front of my kayak.

Do not underestimate how secluded you will be in the Hocking Hills. Your cellphone will likely not get a signal except near the larger towns. Likewise, your smartphone may not give you access to the Internet; potential access to Wi-Fi is one of the considerations you’ll want to weigh in your choice of accommodations. And make sure to top off your gas before driving into the Hills; gas stations outside larger towns are few and far between.

When hiking, stay on marked trails and pay attention to signs warning you of nearby dangers. With all the cliffs and sheer drop offs in the area, you don’t want to risk hurting yourself where rescue will be difficult.

Drive slowly because the roads are quite twisty, and there’s a fairly substantial risk of a deer darting out in front of you. Allow time for serendipitous, unplanned driving because you never know what vistas and rarely seen critters like foxes and porcupines you’ll see. Make sure to have a good old-fashioned paper map on hand. Your GPS likely won’t function, and you’ll need the map to find out how to get back to where you want to go!