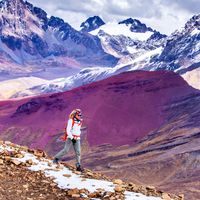 Arikok National Park is an Aruban treasure, a must-visit park that enchantingly blends the island nation's natural beauty with its cultural history. From the native Cacquieto artwork and drawings of the earliest European settlers on the walls of Fontein Cave to the natural pools in the sheltered oceanic enclave of Conchi, there's no shortage of delightful ways for visitors to spend a day (or more) at Arikok while visiting the island of Aruba.

Arikok National Park is a veritable treasure in the nation of Aruba, and it accounts for 20 percent of the entire island. The Arawak drawings, desert landscapes, and giant lizards are some of the highlights to be found amongst the more than 20 miles of walking trails in the park.

The limestone cave systems throughout the park are one of the biggest draws to Arikok, especially the Fontein Cave. It's small but filled with reddish-brown pictographs drawn by the Indigenous Caquetio people from before Spanish colonizers arrived (there are also paintings by Europeans in what is essentially centuries-old graffiti). The nearby Quadirikiri Caves are much larger but natural skylights make flashlights unnecessary for exploring.

An obligatory stop is the Conchi Natural Pool, a giant tidepool protected from the ocean waves by a natural barrier of rocks. It's located on the eastern edge of Arikok and—like most of the remote areas inside the national park—it can only be reached via four-wheel-drive vehicle. You'll either have to rent your own or you can join a guided tour of the park, such as those offered by ABC Tours or Around Aruba Tours.

Hikers can explore the park on foot by choosing one of the trails, which vary in difficulty and length. It's best to arrive first thing in the morning to avoid the intense midday heat and definitely pack lots of bottled water. You can contact the national park before arriving to arrange a guided hike with a park ranger, an excellent way to learn about the flora, fauna, and history of Arikok during your trek.

Long pants are recommended for hiking at Arikok since there are several types of toxic plants along the paths that you don't want to accidentally brush up against. The most dangerous is the manzanilla tree, which produces small apple-like fruits—just coming into contact with the leaves or trunk can cause your skin to blister up.

Where to Stay Nearby

The vast majority of hotels and resorts on Aruba are in the northwest of the island between the cities of Oranjestad and Palm Beach. It's only about 20–30 minutes by car from the resort area to the Arikok Visitors Center, but there are a few options right outside of the national park if you're planning to focus your trip on Aruba's unspoiled interior and away from the touristy coast.

For more information about the best areas to stay in, read more on where to stay in Aruba.

The island of Aruba isn't very big and you can drive from the northern point to the southern point in under an hour. Most visitors arrive at Queen Beatrix International Airport in the capital city of Oranjestad and then stay in one of the resorts along the coast. If you have your own vehicle, it's easy to drive yourself to the park entrance (but remember to drive around within Arikok, you'll most likely need a vehicle with four-wheel drive). If you don't have a car, you can always use a taxi to get to the entrance.

Even though exploring the rugged trails of Arikok presents challenges for travelers with physical impairments, the organization Offroad Wheelchair Aruba has developed special "off-road" wheelchairs that can navigate rough terrain and sandy beaches. If you're a traveler with mobility challenges, contact the organization to inquire about renting equipment or tours.

Tips for Your Visit

Your Guide to Arikok National Park in Aruba