We recently put two of the brands' newest bonfire-style portable fire pits to the test to see which brand does it best. We tested Breeo's Y Series and Solo Stove's Bonfire 2.0 for assembly, portability, heating performance, design, cooking, and overall value. Below are our results and insights for each category.

Both of these smokeless and portable fire pits are excellent. Truly. But because of its value and carrying case, we'll give the nod to Solo Stove's Bonfire 2.0. It creates a scorching, long-lasting and even burn. That said, you can't go wrong with Breeo's Y Series, which we also loved. Particularly, if you're looking for a fire pit that can double as a grill, we suggest going with the Y Series.

Read on for detailed testing insights of each portable and smokeless fire pit. 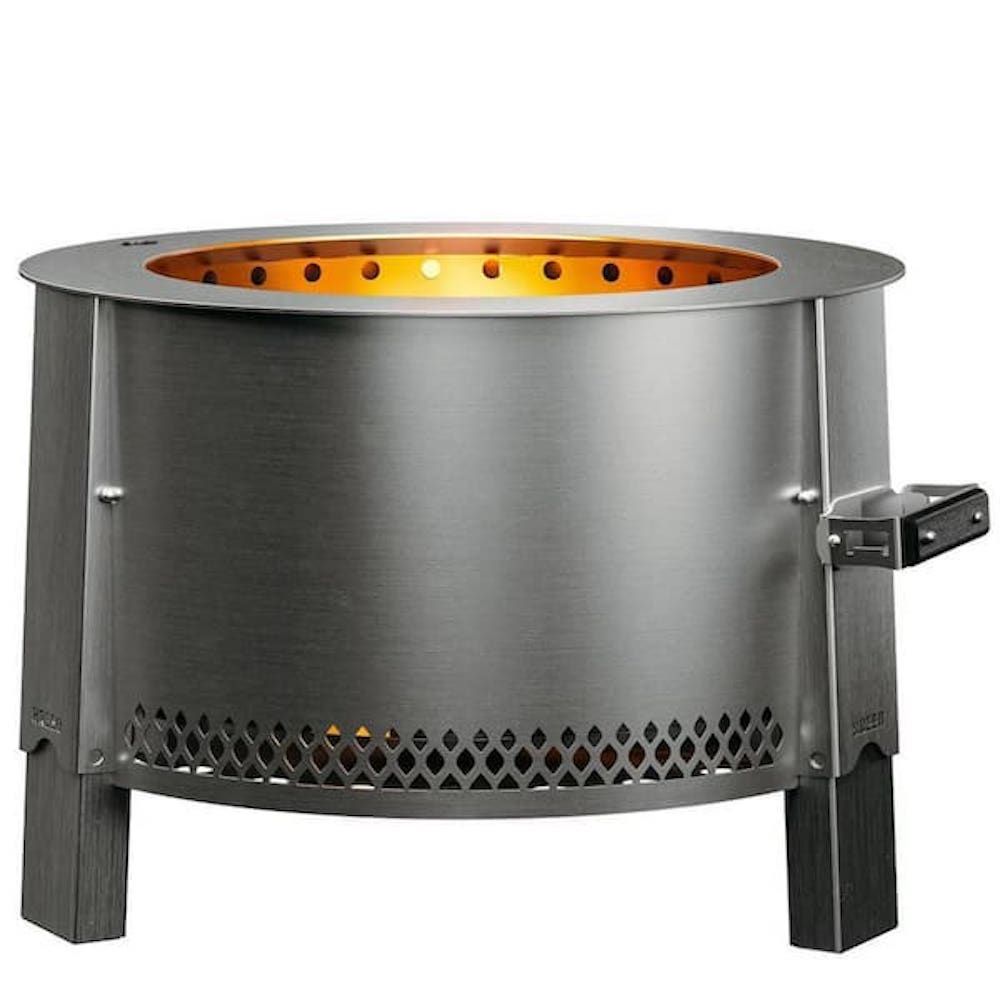 Who should buy this: While the Breeo Y Series is definitely portable for bringing to a campsite, park, or beach, we prefer this option as a permanent backyard pit for cooking. The Pakka wood handles make this pit relatively easy to carry, but at 8 pounds heavier than the competition, this one is more of an effort to haul around. We also like the diversity of features of the Y Series, such as the griddle stand, cast iron kettle, and more, as well as the versatility in cooking technique it offers (more on its cooking benefits below), especially suitable for families and larger groups. 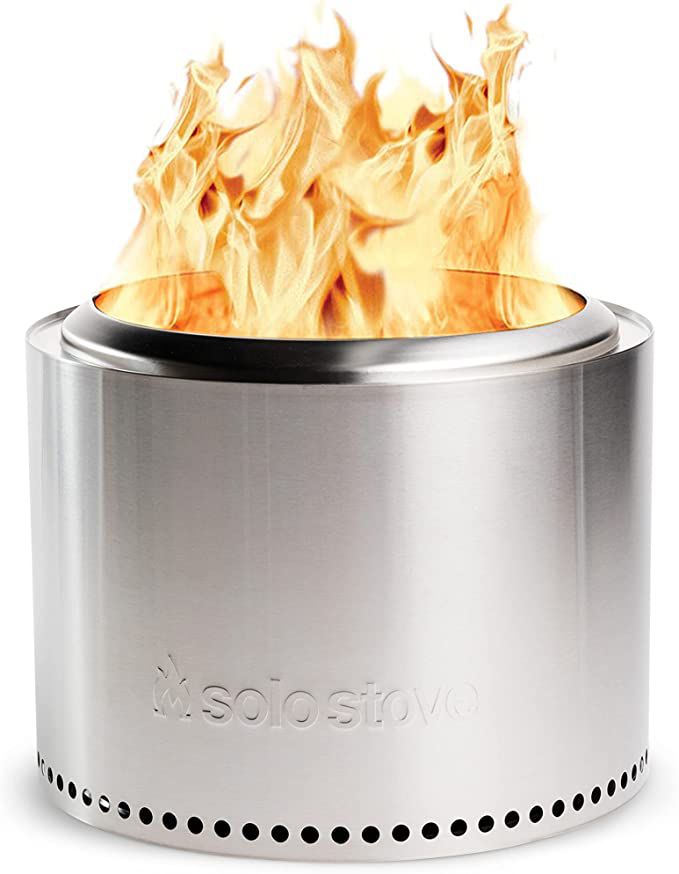 View On Amazon View On Dick's View On Solostove.com

Who should buy this: Anyone looking for a backyard (or beach or camping) smokeless fire pit. The wildly popular Bonfire 2.0 is the mid-range (in size) smokeless fire pit in Solo Stove's line (the Ranger 2.0 is the smallest, and Yukon 2.0 is the largest). All models recently got an upgrade that includes a removable ash pan for easier clean-up (meaning you no longer need to lift the entire fire pit to dump it out). This model still utilizes Solo Stove's 304 stainless steel construction and 360-degree Airflow Technology, which creates a hot and even burn. It's not the lightest, but portable enough to easily toss in the car to take camping or to the beach.

We won't spend much time here because neither product requires any assembly. You can take them both out of the box, set them in a fire-safe spot, and light it up. That's one of the significant benefits of both of these fire pits.

Stainless steel isn't light. And even though these are portable fire pits and lighter than your traditional large iron pits, we wouldn't say either is exceptionally portable. But we'll give the nod to the Bonfire 2.0 for two reasons: It comes with a carrying case and is about 8 pounds lighter than the Y Series while still being about the same size.

"This is actually quite heavier than expected," one tester of the Bonfire 2.0 reported. "While the specs say 20 pounds, it feels like 30 since it's such a large diameter. Even though it comes with a carrying case, as you carry it more than a few steps, it will bang on your legs unless you have the deltoids of Dwayne Johnson. Two people could easily carry it for a short distance, however."

But if transportation and portability is your main deciding factor, go with the Bonfire 2.0.

Seriously, you can't go wrong with either. As someone who has frequently struggled to light a fire in the wilderness (OK, fine, also in fireplaces and campsite fire pits.), I appreciate the innovations made in smokeless fire pits. Starting an efficient fire is where both of these fire pits excel.

Solo Stove does it with its 360-degree Signature Airflow, which sends air through the bottom of the fire pit to ignite the flame. It then "super-heats" the air to burn off smoke before leaving the pit. Double-wall construction also helps create excellent heat retention. Once started, there's little fuel needed to sustain the fire.

"The benefit is clearly once you've got a fire going," a tester reported. "There are no advanced features other than the basic design: air flows in from the bottom of the fire to produce a well-fueled burn, and air recirculates to the top to combust excess smoke. It is a very hot fire that evenly burns the logs, and the combustion is so efficient and thorough, no embers or unburnt logs are remaining."

Using basically the same technology, the Y Series uses what Breeo calls Y Airflow technology (get it?). Air comes in through the bottom while cool air enters the double wall simultaneously. That air gets super-heated (like the Bonfire 2.0) and exits the double walls at the rim of the fire pit. The heated oxygen creates a second burn that reduces the smoke.

Now, there are some limitations to this. Wind can push around the super-heated air as it leaves at the rim, and smoke can escape. So, these fire pits will be smokeless on a perfectly still and calm day or night. But on windier days, you'll have to accept the smoke.

One plus for the Y Series that could push it over the edge for some people is it can burn wood pellets and lump charcoal, while the Bonfire 2.0 will need wood. So if you don't have wood at hand—or don't like burning wood—you might consider the Y Series.

You might be getting annoyed with the ties. But there are a lot of similarities and a lot to like about both of these pits. The double-wall circular airflow makes them very similar. And they're both circular stainless steel fire pits.

"The airflow component of the design definitely works," one tester noted of the Bonfire 2.0. "It's a hotter, more thorough fire, and it is a good way to get every ounce of fuel out of your logs."

Both products have one unique feature we particularly like, so you'll have to decide which one matters most. The Y Series has the extending legs that we really loved. I tested it at and around my house in southern California towards the end of the summer and the beginning of fall (read: wildfire season). We live in the classic wildland-urban interface in rugged and dry mountains and hills near the coast between Los Angeles and Santa Barbara. I loved being able to lift the pit off the ground (we mainly kept it on the concrete to be safe).

Both fire pits come with cooking add-ons. But we liked the options from Breeo a bit more. Breeo offers an Outpost Grill system, Searplate Griddle Stand, Outpost Kettle Cook, and Cast Iron Kettle. We particularly loved cooking on the Outpost Grill System and outside rim of the Y Series. It allows for a lot of cooking surface area, can be raised and lowered depending on how hot your fire is and how quickly or slowly you want to cook, and can swing on and off the fire (excellent for loading wood). There was just so much diversity that we loved and I enjoyed cooking on it more than our typical propane-fueled grill.

We do appreciate that Solo Stove offers cast iron griddles and especially the cast-iron wok. But we found the cooking much more enjoyable and innovative on the Y Series.

Look, there's a lot to love about the Breeo Y Series. I really do love that fire pit a lot. But if you're looking for the best value, we'd have to lean with the Solo Stove Bonfire 2.0. (Especially with it being on sale at the time of publication on Solo Stove's site.) Both fire pits have very similar technology and performance. But the Bonfire 2.0 costs less and comes with the carrying case.

Nathan Allen is TripSavvy's Outdoor Gear Editor. He grew up in a home of foresters that heated the house during the winter with a fireplace. He's also been camping his entire life and appreciated gathering around the fire for food and communion at the end of the day.