Michael Aquino
Mike Aquino is a travel writer covering Southeast Asia and Hong Kong. He lives in Manila full-time, but is perfectly at home in a Singapore hawker center.
TripSavvy's editorial guidelines

For centuries, street markets have been the world's default for commerce. Today, as conscientious travelers shift away from glitzy malls in favor of more traditional shopping experiences, these colorful markets are more popular than ever. And why shouldn't they be? A typical street food market puts together great eats, a fun and lively atmosphere, tons of local culture, and massive bang for your buck—all in one place.

Street markets are also some of the best places for devoted foodies to find a truly delicious and authentic meal. If a day of food exploration at great prices is what you're looking for, we've put together a list of not-to-miss street food markets worldwide that check all the boxes.

You'll find some sixty restaurants—mainly izakaya-style joints serving grilled meats, beer, and sake—all crammed cheek-by-jowl on narrow smoke-filled alleys taking up half an acre off Shinjuku Station's west exit. The district's name, Omoide Yokocho (Memory Lane), evokes its status as one of Tokyo's last parcels that looks much like it did in the immediate post-war era. In the evenings, Memory Lane's izakaya serve up inexpensive yakitori chicken skewers or nikomi, a Japanese beef tendon stew. Alcohol is cheap and plentiful if a little rustic—the clientele favors beers, shochu, and sake over fancy cocktails. Most establishments here have English-language menus available.

It's only open during the weekends of the spring and summer months,
but Vancouver's Richmond Night Market overcompensates with one of the most impressive spreads in North America: over 200 stalls and 500-plus food options spread out over 18 acres overlooking the Fraser River. The stalls serve a mainly Asian-inspired menu—grilled octopus, "flying noodles," and takoyaki included—but also offer its fair share of classic Canadian munchies like "beavertails," a sugary pastry shaped like its namesake animal part. In 2022, the Richmond Night Market runs from May till October; general admission costs 7 Canadian dollars per head, with children under 7 years of age and seniors over 60 allowed in for free.

The secret is out: the city of Taipei is now known as a major foodie destination, its fame driven by down-to-earth food markets like the Shilin Night Market. This jumble of alleyways near the MRT Jiantan Station in the Shilin District serves up a mix of local favorites, international snacks, and some fusion of the two. Shilin's fryers yield some truly scrumptious surprises: skewers of fried milk balls with a creamy center around a crispy batter skin; giant tumblers of multicolored bubble tea; and oyster omelets, or oysters folded into an egg and potato starch batter. The market opens at 4 p.m. and keeps going till midnight.

Street food has become central to Portland's mystique, driven by "cart pods" like Cartopia. Since 2008, this collection of food carts has made true believers of the foodies that gather in its Eastside location, scarfing up late-night pick-me-up treats like Potato Champion's twice-fried Belgian-style fries and poutine; and Pyro Pizza's wood-fired Margherita and puttanesca pizzas. The cart pod is open from 11 a.m. to midnight in the summertime; a covered, heated seating area allows comfortable dining during the colder months.

Barcelona’s La Boqueria is the city’s biggest food market, welcoming over 40,000 visitors daily. The crowds attest to the market’s popularity; tapas bars inside the market serve up little bites of Catalan cuisine to eat on the spot (though seating is fiercely contested). Must-eat spots include Bar Pinotxo, a no-frills tapas place with the best garbanzo beans and blood sausage breakfast in town; El Quim de La Boqueria, notable for its ham croquettes, squid, and fried eggs; and an almost endless selection of delicatessen shops selling Jamon Iberico, the local cured ham, served in little cones for sampling.

This maze of over 5,000 shops in Istanbul has been around since the 15th century—beyond the perfume oils, carpets, and clothing on offer, you’ll also find some of Turkey’s best street food being served from its stalls. Here, the famous Donerci Sahin Usta serves what is probably Istanbul’s best doner kebab; other little kitchens serve out quick bites like menemen, a traditional omelet with peppers and tomatoes; ayran, a savory yogurt-based drink; and Turkish delight, a confection flavored with rosewater, lemon, and pistachio. The Bazaar opens for business from 9 a.m. to 7 p.m. but is closed on Sundays and national holidays. 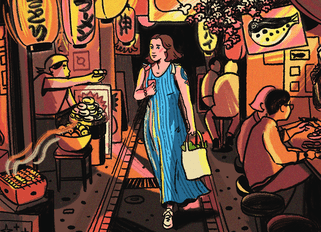