Food plays a massive role in most travelers' decision-making when picking a destination. After all, great food lets visitors taste the local culture and gives insight into a destination's historical influences. As you plan your travel, look to this list of 10 fantastic places, all offering delicious new restaurant openings and dining experiences that make for first-hand cultural experiences.

While first-time visitors to Scotland often overlook Glasgow in favor of Edinburgh, the country’s most populous city is home to a budding culinary scene that rivals that of its neighbor to the east. Glasgow boasts 16 Michelin-starred restaurants, one of which is West End’s Crail Bruich, whose seasonal British produce earned a Michelin star in 2021, making head chef Lorna McNee the country’s only female chef to hold this award.

Of course, given the city’s proximity to the River Clyde, you can expect a lot of seafood-forward dishes here. At Kelp, which recently opened in Glasgow’s Cowcaddens neighborhood in March 2022, small plates meet sustainable seafood with menu items such as hand-dived Barra scallop ceviche and whisky and treacle cured salmon. Crabshakk, too, is a local favorite, where you can dine on freshly caught lobster, seared scallops, and oysters on ice. And if you want to expand from traditional fare, take part in a themed six- or 10-course tasting menu at 111 by Modou, where Senagalese owner Modou Diagne got his start as a kitchen porter in 2014.—Elizabeth Preske, Associate Editor

As one of the most multicultural cities in the world, Toronto’s culinary scene is as diverse as the city itself. Cementing its status as one of the must-visit food destinations in North America, the city just received its first MICHELIN Guide this month, with 74 restaurants and 27 different cuisine types being highlighted.

The strength of Toronto’s culinary experience is tied up in its awe-inspiring diversity. With 53 percent of Torontonians born outside of the country, global influences can be found on every menu in the city, from Egyptian brunch at Maha’s in Leslieville to the Northern Thai flavors of Downtown Toronto’s PAI and the comforting Caribbean classics at Chubby’s Jamaican Kitchen.

The city’s ideal location near three of Ontario’s distinct wine-growing regions and acres of rich agricultural land has also made it a playground for young, emerging chefs looking to use local ingredients in their Toronto kitchens. There’s never been a better time to head north—your tastebuds will thank you.—Astrid Taran, Senior Editor, Special Projects

The food scene in Singapore has always impressed—for years it’s been the only Southeast Asian country that has a restaurant with three Michelin stars and you can get Michelin starred eats at a food hawker stall —but foodies will be especially spoiled if they visit in 2023. The tiny country is now home to 52 Michelin-starred restaurants—seven of which got their first star in 2022—and an additional 67 restaurants received a Bib Gourmand recommendation for 2022. Exciting additions include Euphoria by Singaporean chef Jason Tan, where you can sample gastro-botanica 2.0 (a cuisine he invents); NAE:UM a Korean concept serving innovative dishes; and Marguerite where the seasonal tasting menus perfectly complement the lush garden surroundings.

Vegans also have a couple of innovative new restaurants to try. Analogue is a sustainability-focused, plant-based restaurant that is the first of its kind in Singapore. Vijay Mudliar, the mind behind Native and Analogue, wanted to bring attention to food sustainability both through the menu and the interior design. Set in a restored chapel, the tables are made using mycelium (a type of fungus) and the 3D-printed centerpiece countertop used 3,500 pounds of reclaimed plastic. Love Handle, the country’s first plant-based butcher, also opened in 2022. It lets guests get an “authentic butcher experience” without using any animal products.—Sherri Gardner, Associate Editor

Hoity-toity Beverly Hills might not be a name you’ve associated with trendy cuisine since the opening of Spago in 1982. But this little pocket of Los Angeles boasts one of the highest concentrations of Michelin stars in the area—and, if 2022’s openings are any indicator, there will be more on the way.

The Hideaway, an upscale Mexican steakhouse—think a 36-hour brisket birria, finished tableside—opened in the Rodeo Collection development just last month, while La Dolce Vita, a ‘60s-era red sauce joint frequented by the likes of Sinatra and others, will reopen under the guidance of Marc Rose and Med Abrous later this fall. The city will also see French culinary icon Daniel Boulud make his first foray into the West Coast when he opens a restaurant at the Mandarin Oriental Residences later this year, with the design expertise of Studio Ange.

Lest you think that the city is all about the stars, recently opened Ella, a relaxed all-day restaurant with a buzzy natural wine list, fosters community by waiving its corkage fee for guests who share a glass with a stranger.—Laura Ratliff, Senior Editorial Director

When you think of the best destinations for food lovers, Wilmington might not be the first place that comes to mind. But the seaside town on the Carolina coast is currently undergoing a dining renaissance and is making a name for itself as a culinary hotspot. With award-winning chefs and restaurants collecting accolades and the attention of the national food scene, it'd be a crime to miss out on some of these delicious eats.

For fresh seafood, head over to Catch and have your meal prepared under the eye of a James Beard finalist and a Bravo TV "Top Chef," Keith Rhodes. Vegans will love The Green House, which uses fresh vegetables from their own greenhouse, and Dreamer's Welcome Inn, an entirely vegan bed and breakfast. For a more upscale dining experience and excellent whiskey, head to True Blue Butcher and Barrel—it's a restaurant, whiskey bar, and a butcher shop all in one.

Regardless of where you land, there's a little something for everyone in Wilmington's dining scene, and as the years go on, the food seems to be getting better.—Jalyn Robinson, Editorial Assistant

You would think that a mid-sized city in Colorado would best be known for its easy access to nature, but in Fort Collins, sampling the city’s culinary offerings ranks among the top things to do. You can’t go wrong hitting up established favorites like New Belgium Brewing Co. and Harbinger Coffee—but you’d do well to sample some of the newest additions to the Fort Collins food and drink scene, too. Los Muertos Urban Kitchen & Cantina, which celebrates the spirit of Día de Los Muertos, serves up a healthy selection of tacos, with fillings ranging from al pastor (boneless pork shoulder, pineapple salsa, avocado mousse) to Xochimilco (sautéed, hibiscus, black bean purée, and cheese). At Jersey Cowboy, a mobile food cart you have “to catch,” you can order Jersey-style subs, including the classic pork roll sandwich.

And, since it’s the Craft Beer Capital of Colorado, an ale or two at one of the city’s 20-plus breweries should be on your itinerary. Grab a drink at Odell Brewing Co., one of the most popular breweries in the state, or Mythmaker Brewing, the newest addition to the Napa Valley of beer. Don’t like ale or lager? The Exchange—a hub of restaurants, shops, and other local businesses housed in shipping containers—just welcomed new Blendings at The Hillside Vineyard and Blanchard Family Wines outposts.—Elizabeth Preske, Associate Editor

It may be best known for its diehard sports fans, but Cincinnati's food scene is ready for its close-up. The nexus of culinary action is happening in one of the city's most beautiful neighborhoods, Over-the-Rhine, popular with locals for its classic architecture and young, creative energy. That energy has quickly transformed the area into a foodie paradise anchored by Findlay Market, a 19th-century food hall that serves as a hub for beloved vendors such as Flavors of the Isle, specializing in Jamaican cuisine, and Maya's Bakes, a Black-woman owned bakery.

This month's opening of Element Eatery in the city's Madisonville neighborhood promises to bring yet another exciting food hall to the mix as it begins to add new vendors to build roots alongside the tantalizing Japanese yakitori at Rokaru Ramen, the authentic Puerto Rican mofongo at MashRoots, and the award-winning barbecue at Four Mile Pig. The new food hall will be moving just around the way from Alara, an experiential dining concept focused on shared plates and slated to open early next year. With a new generation of chefs continuing to return to Cincinnati from stints in cities like New York and San Francisco, there is no doubt that further experimentation will be booming in this city in 2023.—Astrid Taran, Senior Editor, Special Projects

In Phoenix, Arizona, some of the most exciting new resorts are also bringing the city’s most anticipated restaurants. The Global Ambassador, a 141-room luxury resort opening in 2023, is helmed by Sam Fox, the mind behind Culinary Dropout and Flower Child. As such, dining will be a key focus with five on-site restaurants, including an 18,000 square food Mediterranean restaurant and the high-end Parisian Steakhouse. VAI Resort is also opening next year, and it’s expected to be the largest resort in the state, boasting 13 new dining options.

But there are already stellar restaurants that draw culinary enthusiasts to Phoenix. Cala Scottsdale, by Beau Macmillan of Food Network fame, opened at the beginning of 2022 and pairs entrees made with locally sourced ingredients and delicious wines. For a fresh take on Southwestern cuisine, look no further than Tía Carmen, led by "Top Chef" alum Angelo Sosa. The charming restaurant incorporates Indigenous American ingredients and uses products from local farms.—Sherri Gardner, Associate Editor

If you're looking for the perfect place to grab a cold one and have a traditional meal, Duluth, Minnesota, is where you want to go. With 10 breweries and cideries in the area and excellent old and new restaurants, this small town on Lake Superior's coast offers excellent eats with its scenic backdrop.

The water from Lake Superior makes the beers and ciders brewed here even more delicious, so much so that they're celebrated every year. The All Pints North festival, held annually at Bayfront Festival Park, brings together brewers from more than 100 breweries across the state. Brand new to the brew scene is Lake Superior Brewing Co., which features a brewery, kitchen, and bar.

More than a century old (and decorated like it, too), the Pickwick Restaurant and Pub offers a full menu filled with hearty meals like steak and barbecue but also some smaller snacks and pub food for those who've overindulged in the beer scene. For those looking for more modern bites, The Duluth Grill, featured on the Food Network, creates more Instagramable eats inspired by several different cultures—you'll find both Korean and Mexican-inspired bites on this menu.—Jalyn Robinson, Editorial Assistant

Named the world’s first culinary capital, you can’t walk alongside the road in Grenada without happening across an assortment of spices and ingredients that are probably in your pantry right now. Nutmeg, allspice, cocoa, clove, cinnamon, ginger, turmeric, and bay leaves all grow in abundance on this island paradise, so it’s no surprise that the food is among the best in the region.

Start your visit by sampling “oil down,” the national dish, which consists of a hearty stew made with spices, natch, vegetables, and meat, simmered low and slow in a coconut milk broth infused with turmeric and ginger. Chicken wings, pumpkin, spinach, breadfruit, and salted fish are all ingredients that you can expect to see in a traditional oil down. 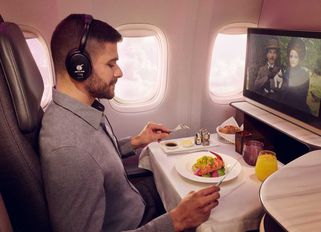