Taking an international trip is a joyful, exciting experience, but the language barrier can create some significant anxiety. Even if you know a few basic phrases, you'll want to communicate on a deeper level, and that's where an electronic translator can come in handy. These handy devices will undoubtedly be useful, from asking for directions to ordering a meal and so much more. Also, some of them can even translate street signs.

A handy device like this can range in cost, with many quality translators costing a few hundred dollars. In addition to price, other important factors include portability and battery life. Some translators have up to 8 hours of use, which will really be helpful while you're on the go. Also, be mindful of how the translators actually work, as some have keyboards and others only have a speak function that can help with pronunciation.

Here are the best electronic translators. 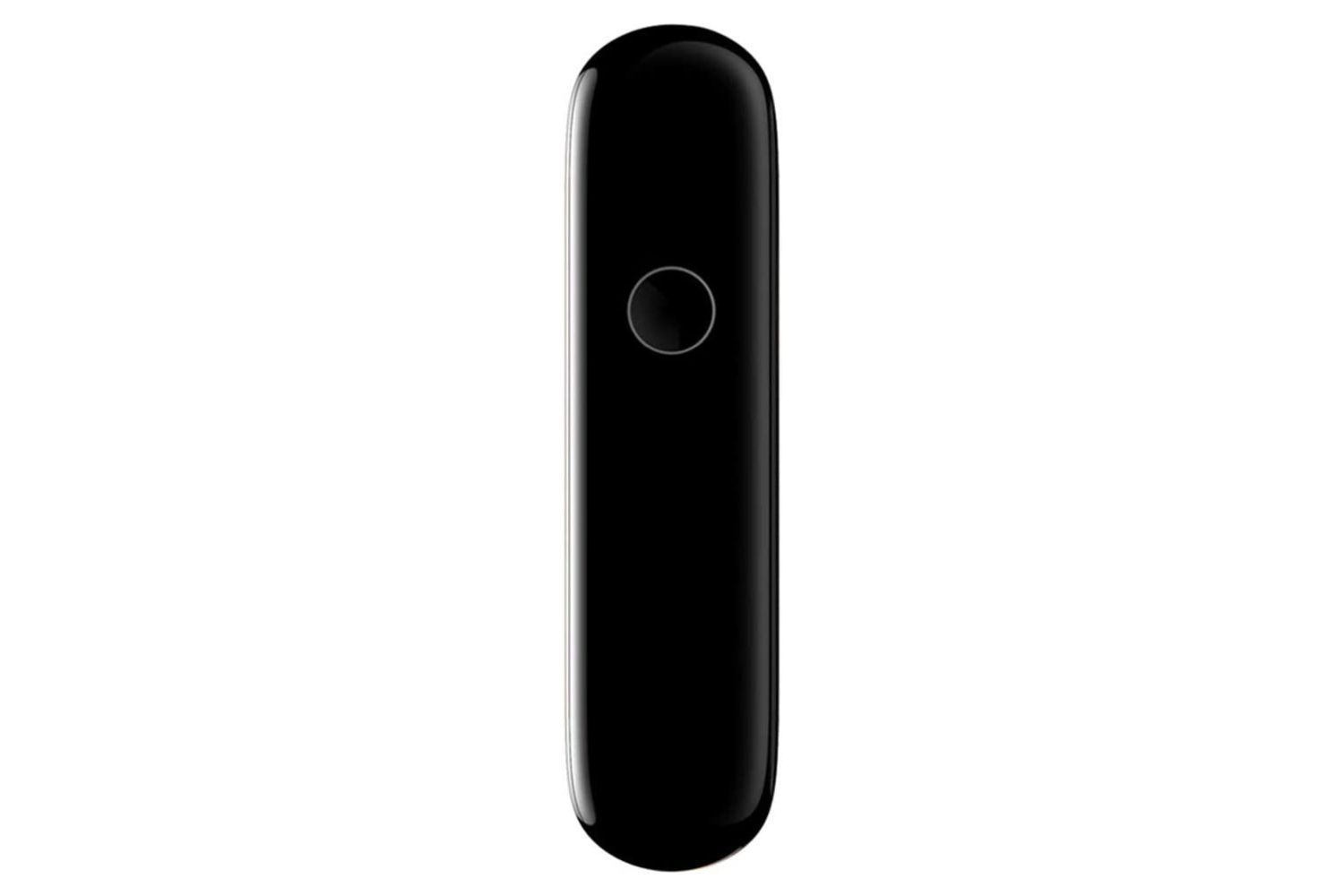 One of the best things about traveling abroad is soaking up cultures that aren't your own—but language barriers can make that difficult. Luckily, you have technology on your side. This sleek translator comes in black, white, or black with silver trim. Though it's small and lightweight (1.3 ounces), it packs a punch. The device translates more than 40 languages, and the battery life is superior. The standby time is up to 180 days or 24 hours of constant use. This is certainly the translator you want for a full day of exploring without worrying about a low battery. Just press a single button, and the voice translation begins automatically, either using data or connecting to the app via wifi. 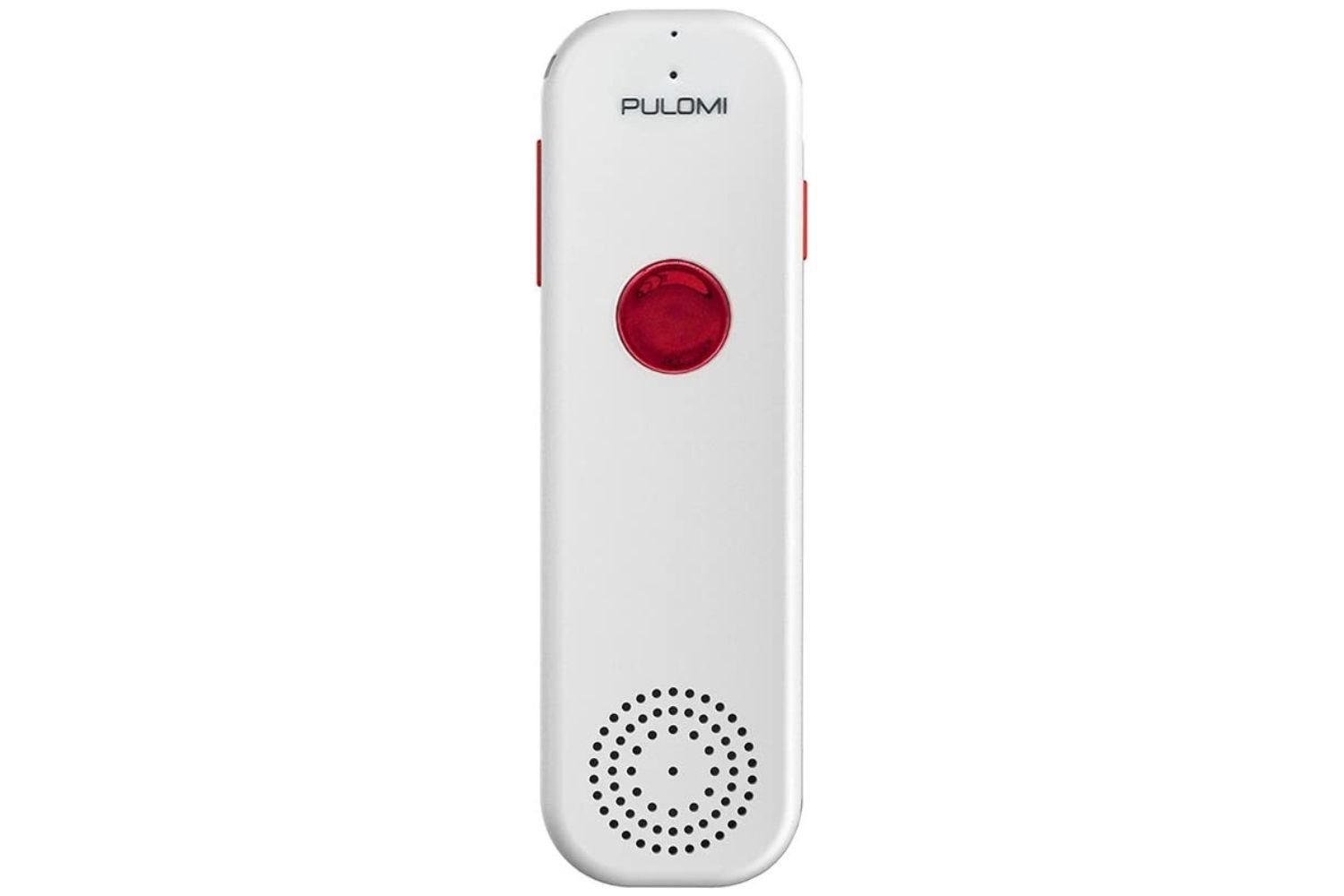 The Pulomi Easy Trans Smart Language Translator Device boasts a compact design and superior voice translation capabilities: simply push the button on the device and hold it down until you’ve finished speaking, and it will recognize what you say and translate your words aloud. The language translator supports over 50 languages and can also be used as a Bluetooth speaker. For travelers who aren’t multilingual (yet!) but want to be able to communicate with locals effortlessly, the Pulomi Easy Trans Smart Language Translator will help you sound savvy. 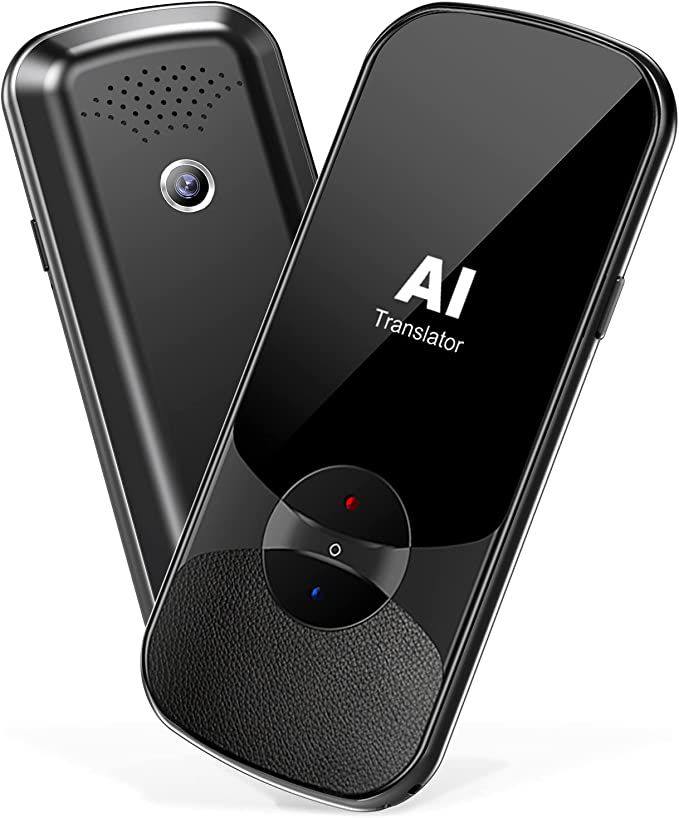 While you may be dreaming of striking up a conversation with a local, digital translators can help translate images in addition to verbal cues. This one from Vormor features a 5-megapixel camera equipped with OCR (character recognition) technology which can translate images between 45 different languages. Two-way voice translations are available in 106 online languages and eight offline options boasting an accuracy rating of 98% in less than 0.5 seconds. The T11 allows you to easily explore your new surroundings by reading road signs, restaurant menus, and product labels.

If you’re heading to China, it’s worth investing in the Langogo Genesis AI Translator, which integrates 24 translation engines with its easy-to-use, one-button translation design. The 3.1 -inch retina touchscreen displays transcriptions of up to 4 hours of recorded speech. In addition to supporting over 100 languages, a data connection translates Chinese, Japanese, English, and Korean even if you cannot connect to WiFi. Thanks to innovative, self-learning AI technology that learns over time, the translations become more precise with each use. Plus, the Langogo is more than just a mere translation tool—it’s a mobile hotspot device and voice assistant. This device can deliver helpful information about local attractions, hotels, exchange rates, weather forecasts, and more when traveling.

The Pocketalk Model S allows for lightning-fast communication and will help you shop, dine, and navigate your way throughout Japan. The new generation of a Japanese bestseller, this pocket-sized device includes all of the best parts of the classic translator plus some updated features. Like the previous model, the Model S supports two-way translations between 82 languages, and 14 are also available offline. Plus, it converts currency, measurements, and temperature. Unlike the older model, this Pocketalk features an eight-megapixel camera for image translations—it can even pick up handwriting. Though it is a bit of an investment, you get a lot of technology to enhance your next overseas trip. 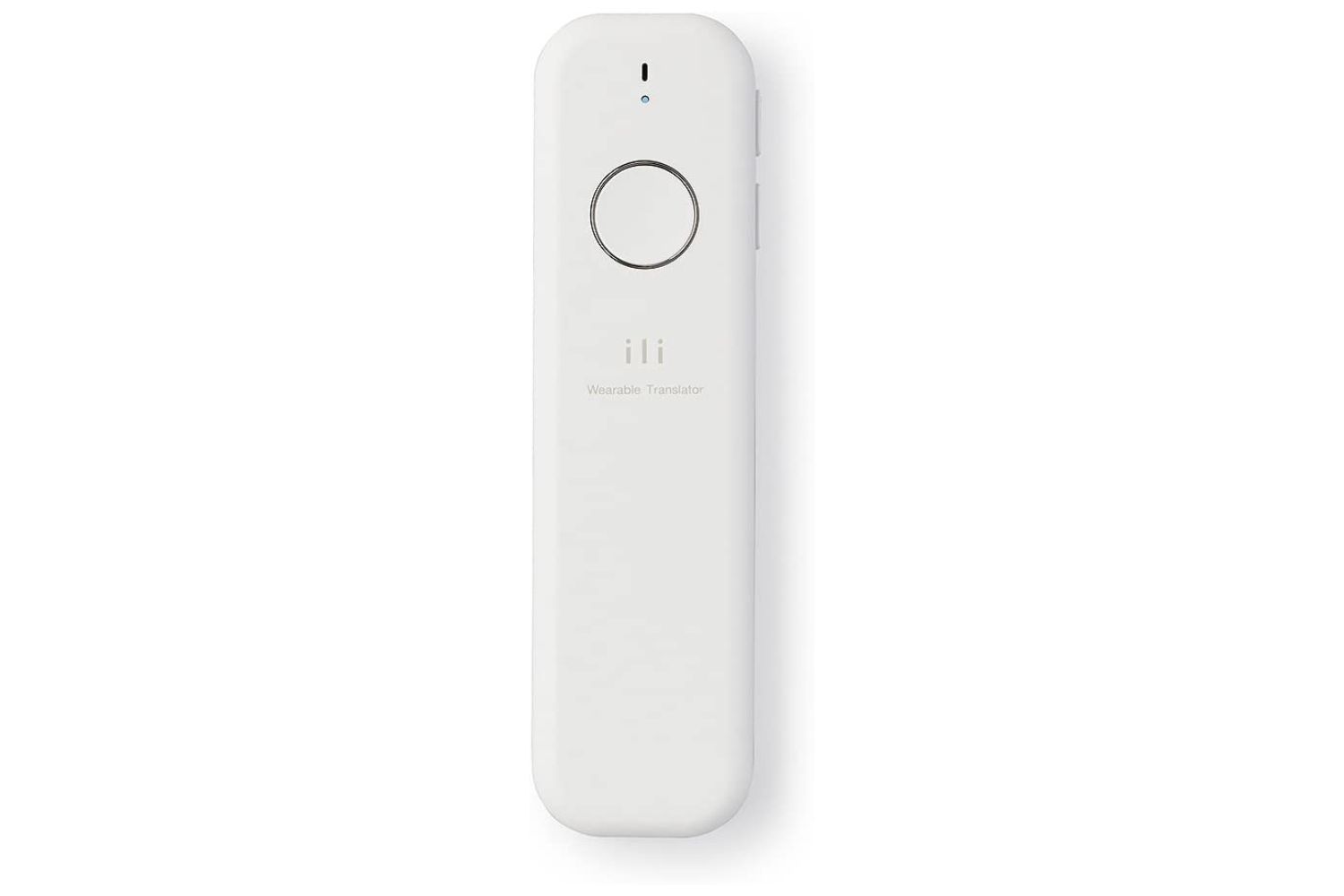 Get ready to have full-blown conversations in Spanish with the ili Wearable Translator. This small, hand-held language translator has three buttons, including the power button—to translate, you hold the big button down to have the device listen and automatically translate, and tapping it again will repeat the phrase. The third button repeats back what you said (in Ili’s voice), and if you hold the button down, it switches between Spanish and English (the device also offers Japanese and Mandarin). This is as close to real-time translation as is technologically possible. The Ili is ultra-portable and wearable and even works without an internet connection. 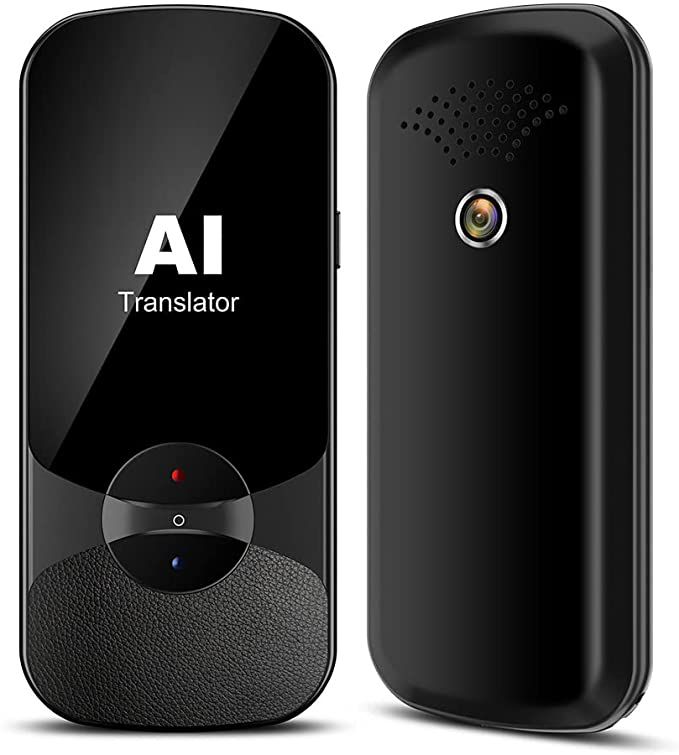 You’ll be eating croissants in cafes and conversing with French locals in no time when you bring the Buoth Two-Way Smart Voice Translator along with you on your travels to France. This powerful device provides translations between over 100 languages online with an accuracy rating of 98 percent. You can record important meetings or interviews for up to 60 minutes with transcripts. The large touchscreen displays the text from either voice or recorded speech, a great feature to support language learning. It also has a camera for photo translation between 45 languages and OCR technology. 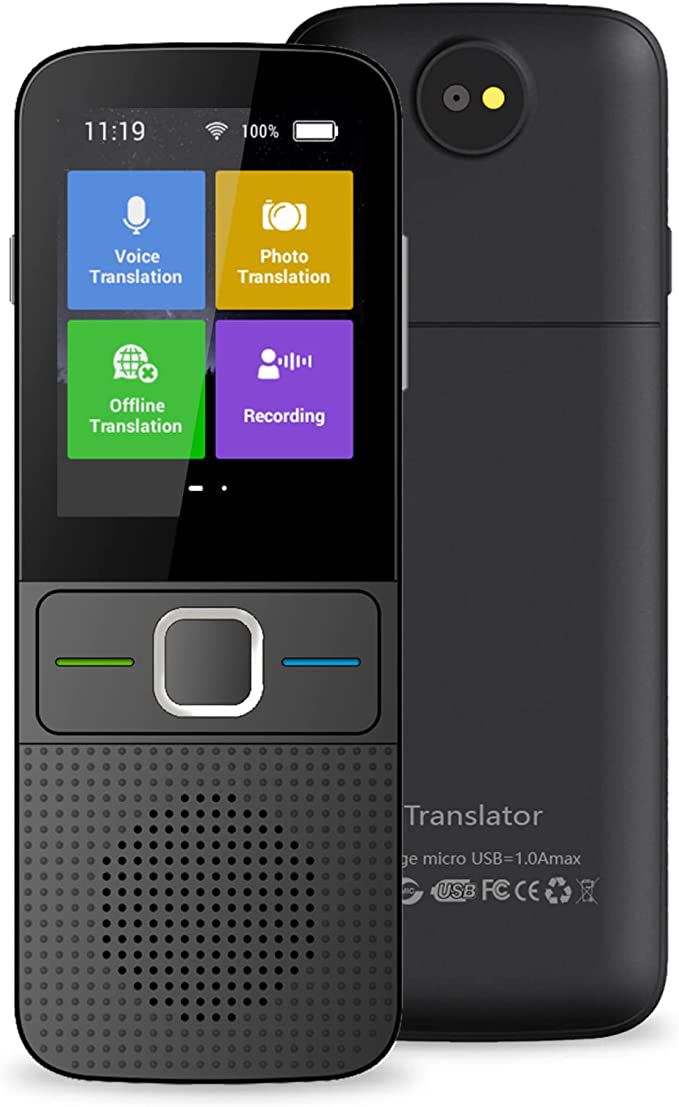 Seamlessly adapt to Russian culture with Weinsentking Language Voice Translator Device. Covering an impressive 137 languages, it is one of the most versatile electronic translators available, and there's no need to download another application. In addition to voice translation, you get photo and recording translation to support all travel, from eating in restaurants to enjoying local events. While this language translator works best with WiFi or hotspot connection, there is an offline library of 14 languages (Russian is one of them). 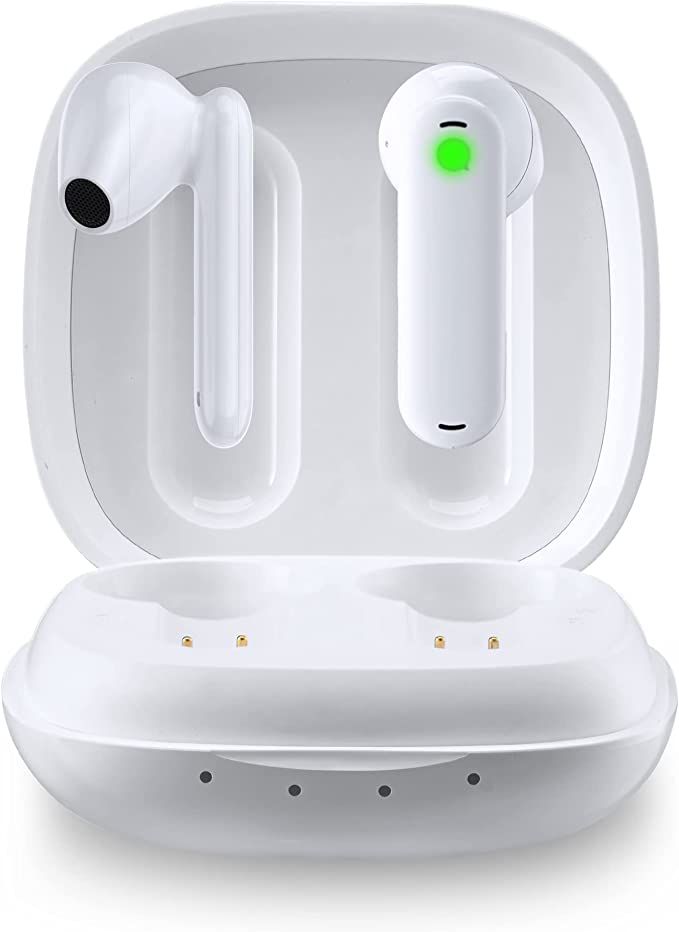 Experience German culture like never before with Timekettle's WT2 Edge Translator. Unlike the other devices in this list, this system uses earbuds to offer real-time bidirectional translation between 40 languages and 93 accents. Depending on the situation, use one of four communication modes, such as Group Chat or Simul Mode. Participate in professional settings, walk and talk with a local, and find a local beer hall with this hands-free option. We also love that the charging case boosts the battery life to 12 hours.

What to Look for in an Electronic Translator

Some translators can handle any language you throw at them (or, at least, quite a lot of them); others are equipped to handle one language only, like Chinese or Spanish. Be aware that the do-it-all types might not have quite the vocabulary range of dedicated models, but if you’re jet-setting all over, having a lot of the basics covered—versus buying a different translator for every language—might be ideal.

Depending on how often you travel, you might want to weigh whether it’s better to splash out a bit more on a translator with better voice recognition and vocabulary or grab a budget model that covers the basics for a one-off adventure.

Think about how you’re likely going to use an electronic translator. A voice-input translator might be your best bet if you’re primarily trying to translate conversations. Conversely, a keyboard-based model might limit you when figuring out what others are saying.

The last thing you want is a translator's battery dying on you while in a country where you don't speak the language. Some translators don't list the device's battery life, but for those that do, opt for one with at least six hours' worth of juice when fully charged.