For two minutes every day, social media users pause to capture what they're doing at that moment. No cropping, no fancy filters, and no cheating—these are pure and raw photos of what people are doing right then and there. And to double down on the honesty, a front- and back-facing image are taken simultaneously to guarantee authenticity.

Being real is the entire mentality behind BeReal, the social app founded in 2020 by Parisian Alexis Barreyat, a former GoPro employee who now serves as the CEO, that went so viral this year that it was named Apple's iPhone App of the Year, topping 53 million installations globally, with a 2,254 percent rise in active monthly users since January 2022, according to TechCrunch. And perhaps as proof of its pop culture dominance, it wasn't just spoofed (or rather, lauded!) on the season premiere of Saturday Night Live—its cast members regularly repost their BeReals on their public Instagram Stories.

The app is especially impacting the travel space, which has long been known for meticulously curated and idyllically filtered posts, not always capturing the real essence of a locale. "Be Real is causing people to be more real with their traveling experiences," Travis Cronin, Us Weekly entertainment director—and BeReal aficionado, told TripSavvy. "Since there are no filters, post-production apps, and no changing the lighting, it really offers a fresh look at friends' vacations."

The concept is simple. At a different time each day, the app sends an alert with two yellow warning symbols surrounding the words "Time to BeReal." Below it, it reminds users, "2 min left to capture your BeReal and see what your friends are up to." During that time, users point their camera at their current POV while the phone takes a photo of both what they see and a selfie. While there is also an option to share their location and include a caption, the image itself matters most. The POV shot will be displayed large with an inset of the selfie, but friends can toggle between the two by pressing each box. They can also comment and react with RealMojis, emojis-like photos they've taken of their own expressions.

With the timer ticking, users technically can retake images, but once that time is up, friends will know the post is late. Though some say there are no consequences to posting late, it's all about the social pressure; otherwise, "everyone knows your BeReal wasn't being real," as SNL best captured in its sketch about what it called "the only honest social media."

Without time to find the picture-perfect background, figure out the best angles, or maybe even get that spinach out from between your teeth, the shots capture a true moment—and share that same slice of time with everyone else in your network. Plus, there's another catch: You can't see your friends' posts each day until you post a photo, too—that way, there's no lurking without participating.

All the little checks and balances feed into the basic philosophy behind BeReal. "We want to make people feel good about themselves and their lives," the company, which calls itself an "authentic, spontaneous, and candid social network," said. "We want an alternative to addictive social networks fueling social comparison and portraying life with the goal of amassing influence. We are built for everyone that wants to connect with friends and family in an authentic, spontaneous, and qualitative way."

Unlike other social apps—where often the goal is to gain attention and connect with celebrities and influencers—the idea here is to rein in those likes. "What's cool about BeReal is it really keeps your circle small because of how you add contacts," Cronin said, referring to how friend requests must be accepted before seeing their feeds. "I know celebs are using it with their circles, and students and Gen Zers also love it."

Alice Preece, a 22-year-old public relations specialist in London, first downloaded the app six months ago after learning about it from her boyfriend's younger sister, who was still in high school. "I then started realizing that more and more of my friends were getting on BeReal over the summer," she said, noting that all her work colleagues in their 20s were also on it. But when she switched jobs and became one of the only Gen Zers at her company, she "noticed hardly anyone had heard of the app."

She believes everyone started using it across the pond—where it seemed to catch on before the U.S.—because they did "not want to miss the bandwagon." "Plenty of people my age were really resistant to TikTok at first, but once we got involved, we loved it," Preece said. "So I think it could be that fear of missing out and not being 'cool' that encouraged lots of us to get on BeReal." Indeed, the company said its app's initial growth was among college students, but it is now multigenerational, even adding "families use BeReal together."

Despite its emphasis on the raw moments, there are still ways to nail the perfect BeReal post. "For the front-camera picture, be looking at something dynamic; that can even just mean switching it up to different rooms in your home," Cronin said. "Sometimes think of BeReal as a little show-and-tell of your home life when the notification pops up when I'm at home. Then, for the back camera, I try to switch up angles and poses—taking the picture from way higher up one day, throwing a peace sign, making an unhappy face, just to give my day-to-day pics some variety."

But he said being on the road is perhaps the best time to BeReal "because usually there are so many more options for things you don't see every day," he said, noting that might also mean breaking the two-minute barrier. "When you're traveling and doing something really cool later in the day, I think it's absolutely fine to wait to post…BeReal is so great for those 'top of the mountain' pictures, when you've worked hard to get to a beautiful view, it really shows on your face and creates such a beautiful picture… it'll be worth it that all of your friends will be notified of your tardiness."

Preece also lets newbies in on an essential tip. "A telltale sign of being new to the app is when you don't realize there's a delay between it taking the front-facing camera picture and the back camera picture," she said, as many users start with so many blurry photos of themselves. But that's also an opportunity to get even fancier. "If you're taking a mirror selfie, change your pose for the back camera pic. Or just flip your phone around to get another angle of you and your friend! That's a good tip, especially if nothing is exciting going on behind the camera and you want to spice up your BeReal a bit."

BeReal makes it clear when you haven't been super authentic, so don't try to fight it

Of course, the logistics of traveling can often be a hurdle, and there are times to ignore social media pressure, especially when safety comes first. Whether you're going through the security check at an airport, behind the wheel on an epic road trip, crossing the street on an urban adventure, pedaling through the woods, sailing the seas on a high-speed boat, zooming along a zipline, keeping an eye on the little ones by the pool, or navigating hazardous weather, there are obvious moments where the good ol' "it can wait" philosophy of texting and driving kicks in with BeRealing and traveling. And the company itself warns: "BeReal may cause accidents, especially if you are riding a bike."

Time zones can also be a hiccup for global travelers, as those traveling eastward around the globe may find their notifications going off in the middle of the night. There are four time zone options: Americas, Europe, West Asia, and East Asia. But users do need to go into the settings to manually change their preference if they'd like to switch. And, of course, they won't be sharing the same two minutes as their friends back home.

While the two-minute signal can go off day or night and is seemingly random, the company let us in on a little hint: "It's a secret on how the time is chosen every day, it's not random!" That's led to BeReal Time Predictors online, trying to crack the formula. But as the company said, "BeReal won't let you cheat, you can try, and if you manage to do so, come work with us."

But when it comes down to it, BeReal enthusiasts say to lean into the app for all it is. "BeReal makes it clear when you haven't been super authentic, so don't try to fight it," Preece said. 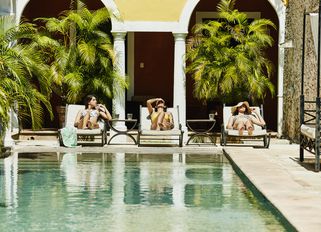