TripSavvy Is Celebrating Architecture and Design in August

From the sharp wings of the Sydney Opera House to the stately columns of the Parthenon, the modernist train stations of Tokyo to the poolside bungalows of the Chateau Marmont, the first and longest-lasting impressions we get of a destination are often through its architecture and design.

As a design lover, strolling around a new city and taking in the exteriors of the buildings around me is one of my favorite things to do while traveling. This past week, with some downtime between visiting friends in Germany, I hopped on the train and spent a few days in Vienna, a city I’ve never visited before. It turned out to be a perfect choice: small and walkable, I spent my time popping in and out of gorgeous, historic buildings like the the Opera House, the Albertina Museum, St. Stephen’s Cathedral, and the Rathaus. As I walked around sipping coffee and munching on Viennese pastries, my eyes feasted on design, from classic Baroque to Neo-Gothic.

Design has the power to shape the way we are welcomed to a country, like the vibrant azulejo tiles that line the streets of Portugal or the dreamy riads found in houses across Morocco. A destination's architecture can also become a symbol in its own right, like the Eiffel Tower in Paris or the Empire State Building in New York City.

Earlier this year, I had the opportunity to visit another world-class design city, Stockholm, and decided to explore the Skogskyrkogarden, one of the most highly influential cemeteries in the world. Designed by Gunnar Asplund and Sigurd Lewerentz, the cemetery reflects the country’s architecture shift from Nordic Classicism to functionalism and was made a UNESCO World Heritage Site in 1994. It was so beautiful that I ended up spending an entire afternoon strolling through the graves, taking in the clean, modern, design.

I wrote about that experience for this month’s Architecture & Design features package, which also features awe-inspiring design stories from around the world, ranging from the new hotel openings we're most excited about to the history of Stockholm's design-forward cemeteries and Knoxville's pink marble, as well as features on the world's most beautiful coffee shops, walled cities, metro stations, and more, we've got you covered. The next time you’re sitting in a cafe or even riding the metro, we hope this package inspires you to take a deep breath, look up, and take in your surroundings. 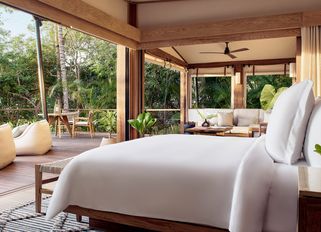