Why Airline Food Is Better Than You Might Think

"What's the deal with airplane food?"

Most of us have heard the classic Seinfeld trope, but long gone are the days of (most) airplane food jokes, as airlines work to up their games to keep up with the competition. While the COVID-19 pandemic threw many airlines’ catering plans for a loop as they drastically reduced service touch points and scrapped the good stuff to save cash, air carriers are once again loosening their purse strings to restore and enhance what they had.

Now, many are partnering with celebrity chefs, while others are following the trends to add more plant-based and sustainable options.

Airline budgets vary around the world, and the cash invested in the onboard experience is often an important part of their branding and marketing proposition. The amount they spend often correlates with the ticket price, too—economy class, understandably, sees fewer investments than the pointy end of the plane.

For example, Austrian Airlines and Turkish Airlines famously employ chefs on board their flights who take passenger orders and plate meals in the galley to be served from elaborately designed, multi-tiered carts. Making a triumphant return after being suspended during the pandemic is Austrian’s famous coffee service. Chefs prepare coffee from a menu of nearly a dozen specialty drinks in a nod to the country’s café culture. Both carriers partner with renowned catering company Do & Co, and use their dining experience as a way to attract flyers.

In today’s TikTok and YouTube culture, this type of attention to detail can pay off. Customers unintentionally become brand ambassadors by sharing their onboard experiences via social media. For airlines that invest less, this same phenomenon can have the reverse effect.

Dining in the sky helps pass the time while providing culinary entertainment to hungry passengers. Airlines continue to build relationships with celebrity chefs to elevate their offerings over the competition.

Air France has a new partnership for its first and business class cabins, with Chefs Michel Roth and Anne-Sophie Pic lending their names and recipes to the airline's onboard menu. For a national carrier that hails from a country synonymous with haute cuisine, the tie-up is almost essential to the airline's brand. Dishes include beef with pan-seared foie gras in a truffle sauce and chicken supreme with olives and black truffles.

Even behind the curtain in economy class, Air France displays its French flair—it is the only airline in the world to serve complimentary Champagne in all cabins.

Dutch star chef Jonnie Boer and sommelier Thérèse Boer of restaurant De Librije show their talents in KLM's World Business Class on flights departing Amsterdam. Menus will change every three months and include dishes like baked salmon with broccolini and grilled zucchini in cream of tahini. Even the service ware (plates, trays, and silverware) is getting an upgrade from Dutch designer Marcel Wanders to be lighter and more eco-friendly.

Qatar Airways, which operates the world's largest airline catering facility under one roof, has a new partnership with Malaysian celebrity Chef Wan for business class meals on select routes. This joins existing partnerships with Chefs Nobu Matsuhisa and Vineet Bhatia, who designed menus for the premium cabin.

In economy class, Qatar treats passengers to pasta and bread made from scratch, omelets made by hand (no rubbery eggs here), and a whopping 66 special meal options. It is no surprise that the Qatari national carrier has won the Skytrax Airline of the Year award six times, which reflects its generous catering budget.

Other economy class investments include British Airways' partnership with Michelin star chef Tom Kerridge for its buy-on-board menu on short flights. JetBlue launched transatlantic flights last year and has won accolades in its Mint and economy class cabin. Passengers in the main cabin can build their own menu from six main dishes and side options. They select three plates from New York's restaurant group Dig.

Healthy and Sustainable Dining in the Sky

Singapore Airlines launched a partnership with Golden Door Spa for its flights from the United States, some of which can stretch to as many as 19 nonstop hours in the sky. It features spa-inspired meals that promote rest or energize (depending on your preference) and hydrating drinks. The carrier tapped a team of nutritionists and sleep experts to guide the menu choices. They include dishes like citrus salmon over pumpkin dal, basmati rice and cilantro ghee, and oatmeal with goji berries, blueberries, quinoa, almonds, and honey for breakfast.

Lettuce on the airline’s flights from Newark is grown on a hydroponic farm not far from the terminal. This assures the freshest product while reducing unnecessary emissions, transporting it from farther away.

Locally sourced produce is part of the new first class and international Delta One menu on flights departing from Atlanta. Chef Mashama Bailey, winner of the 2022 James Beard Foundation’s award for “Outstanding Chef,” designed dishes like short ribs with kanni sauce and smoked collard greens or a vegan vegetable tagine with roasted sweet potato topped with a chermoula sauce to be served at altitude.

In another eco-friendly move, by the end of this year, Air France has committed to serving 100 percent French meat, dairy products, and eggs on its flights and sustainably caught fish in all cabins.

Vegetarians and vegans are not left out, either. Alaska Airlines offers a vegan salad in partnership with West Coast company Evergreens. Delta now serves Impossible Foods meatless meatballs and Impossible burgers on many of its flights in the premium cabin.

Not Everything Is Back Just Yet

Despite the advancements, COVID-19 still has lingering effects on inflight dining. United has yet to bring back its full Polaris meal service. Instead, long-haul flyers in business class receive their meal all on one tray with a small salad, main dish, and appetizer at once. Previously, it was coursed more elegantly with a dessert cart for made-at-your-seat ice cream sundaes and more lavish dessert options.

Delta is not much different after trading in its more informative printed menus for a QR code that doesn’t always work once in flight. Its highly praised, multi-tier dessert cart, where passengers choose from an array of cakes, ice cream sundaes, and trays of fruit and cheese, has also been reduced to a small plate delivered to your seat.

Airlines say reduced staffing on board and in catering kitchens, as well as a desire from passengers (and crew) to shorten the service, has led to the changes. Luckily, innovations such as pre-ordering meals on airlines like Air France, American, Delta, and Finnair, among others, meaning you’ll have a sneak peek of the menu before your flight. It also helps to reduce food waste, which is good for the environment. Whether it’s a pack of pretzels or Dom Perignon and caviar, dining above the clouds is improving to make those long-awaited trips we’ve been planning all the more pleasant. 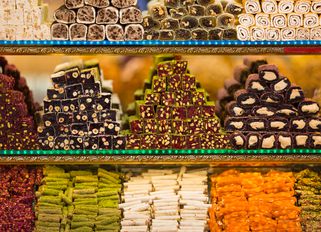